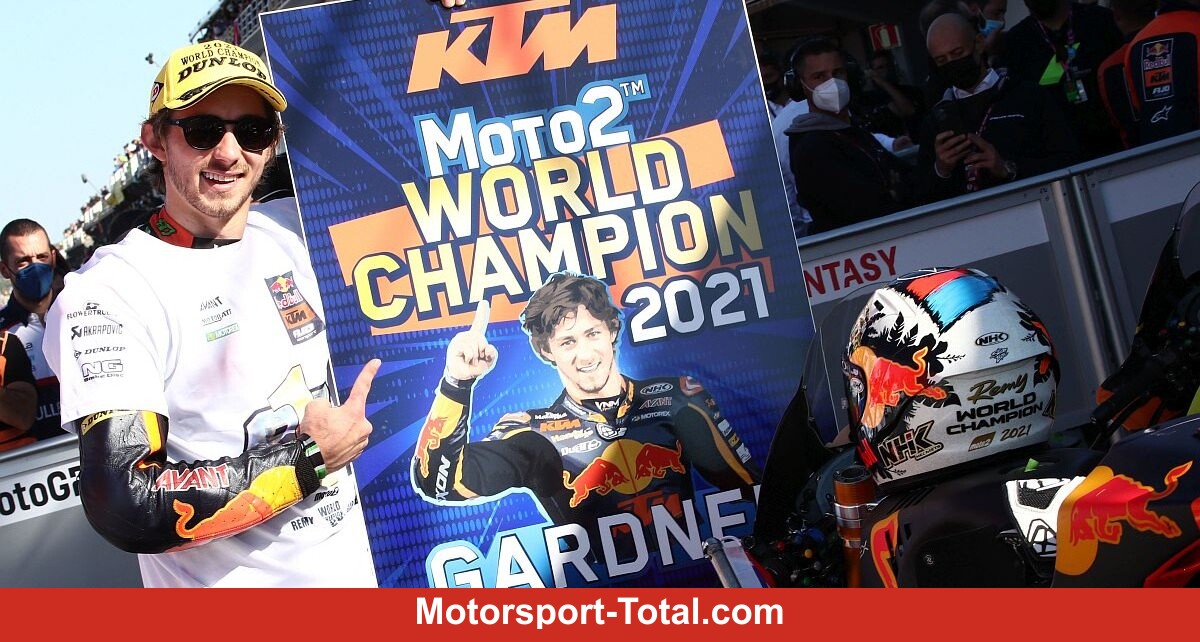 (Motorinformed.com) – Raul Fernandez may have won the season finale in Valencia, but Remy Gardner secured the Moto2 world title in 2021 in tenth place. After 18 races, the Australian is four championship points ahead of his Ajo team-mate.

Remy Gardner is Moto2 World Champion of the year 2021
zoom

As a rookie, Fernandez won eight races. The Spaniard was eliminated three times by falling. Gardner celebrated five wins this season, but only retired once. “On bad days, a few points are better than no points,” says Gardner. “That brought me the world title in the end.”

So Fernandez said after the World Cup final in Valencia: “I did what I had to do to win the World Cup. I didn’t lose it here, I lost it in other races. It was a fantastic season. But my feeling is strange. “

“I won the race, but not the world championship. Still, I am very happy. With eight wins I set a new record for the first Moto2 year.” Marc Marquez won seven races in his 2011 rookie season.

After Kel Carruthers in 1969, Gardner is the second Australian to win the middle class. “It was an intense season,” says the newly crowned world champion. “Raul had a fantastic season as a rookie. I had to work really hard for it.”

“It was an incredible season with lots of podiums and five wins. There were so many great moments with the team. There were moments when I was second and thought it was a bad day. But you have to enjoy every moment . “

In Austin, Gardner had his only failure due to a fall. This was followed by a difficult race in Misano with seventh place. But then he defeated Fernandez in Portimao in a direct duel. “My best race was Portimao. That was the decision,” Gardner is sure.

Gardner admits: “Too stiff” in the Valencia race

At the final in Valencia a 13th place for the world title would have been enough for him. The 23-year-old drove a defensive race and did what was necessary with tenth place. “No doubt I was stiff on the bike,” admits Gardner.

Did he get any advice from his father Wayne (1987 500cc World Champion) before the race? “No. I knew what to do,” says Remy Gardner coolly. But it wasn’t easy. The race had to be stopped after an accident on the first lap.

At the season finale, the Australian drove a defensive Zoom race

“The restart made it much more difficult. You mentally adjust to the race and then you have to do everything all over again. It was difficult to keep your nerve. It was a different strategy than in all other races.”

“I saw that it was a bit chaotic at the front. That’s why I said to myself that I would definitely not be involved there. Then I got pressure from the drivers behind me. I tried to secure the race in a respectable position break up.”

What role did Wayne Gardner play?

In addition to the Roberts family, the Gardner family is now the second family in which father and son became motorcycle world champions. “People think his name is Gardner and everything is easy because he has everything,” says Remy Gardner. “But it was tough.”

“Personally, I had no pressure about the name. Some doors closed, others opened. He helped me at the beginning of my career. I wouldn’t be here without him. In the past four or five years it was more me. “

“In the World Cup you’re a professional athlete. It was up to me to learn and improve. Of course it’s a fantastic moment for me and my father. It’s a dream that we share.”

Wayne and Remy Gardner in 2018 Zoom

But it was a long way until Gardner had worked his way to the top of Moto2. In 2015 he contested a full Moto3 season with Mahindra and made it into the championship points only once. After a detour to the Moto2 EM, Gardner got into Moto2 in the summer of 2016.

Many difficult years with injuries and setbacks

“2015 to 2019 were really difficult years for me. There were times when I thought it was over. That was especially the case after injuries. The worst was the break of both legs,” he remembers 2018 back.

Gardner was then starting his sophomore year at Tech 3. In the spring, he injured both of his legs while training in motocross. “That was a really bad accident. When I sat home after the hospital, I thought that was it.”

“I didn’t have any results or a contract for next year. One day when I was playing PlayStation I was like, ‘What choice do I have? I can sit here and cry about it, or I can sit up and give it my all . I did that.”

“I was in the gym eight hours a day until I was completely knocked out. The doctor said I had to stay in a wheelchair for three months, but after the third week I was wiggling around my house like a penguin. I never gave up . That paid off. “

In 2019 Gardner achieved his first podium in the SAG team. In 2020 he managed to establish himself in the top field and celebrate his first victory. Gardner took the next step with the move to the top team Ajo. In the coming year the Australian will ride for Tech-3-KTM MotoGP.

Marquez’s plan to be on the Sepang check – GP Inside
Wickens concentrating on race wins on racing return with Hyundai
Prost “disenchanted” that the separation with Alpine leaked within the media
For Ezpeleta, Petrucci’s profitable Dakar reveals the extent of MotoGP
Even fewer pit stops in 2022?