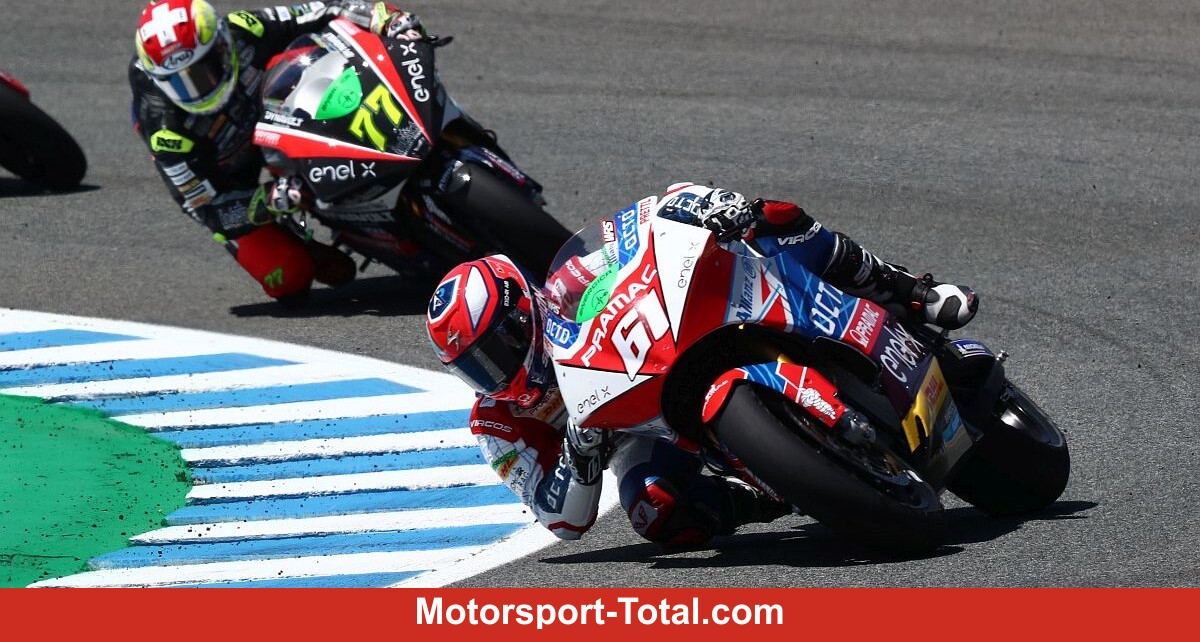 (Motorinformed.com) – MotoE started the new season in Jerez with a maiden win for Alessandro Zaccone. The Italian from the Pramac team prevailed in a tumultuous race against Dominique Aegerter (IntactGP) and Jordi Torres (Pons), who completed the podium at the season opener.

Eight laps were scheduled for the first MotoE race in 2021. Eric Granado started from pole position, who already presented himself well in practice. Lukas Tulovic and rookie Fermin Aldeguer completed the first row. Anger, Zaccone and Torres started the race from the second row.

Tulovic decided the start for himself, Granado and Aegerter placed themselves behind. The first falls occurred further back: Kevin Zannoni and Corentin Perolari collided. Zannoni was able to continue the race.

During the course of the first lap, the lead changed to Granado, while Tulovic lost positions. But it got even worse for the German: On lap two, the Tech 3 driver collided with Aldeguer and had to give up the race.

Granado set the pace up front. However, Zaccone, Aegerter and Torres kept up. There was a gap behind it early on. The race pace was in the top group with medium to high 1:47 times. After three laps, Granado had established a lead of a good five seconds over the pursuers.

On lap four, however, the Brazilian who was in the lead threw away his bike. A front wheel slide in Turn 6 ruined his chance to win. With that, Zaccone led the race ahead of Aegerter and Torres, while further down the field there was another crash. This time it got to Xavi Cardelus.

With three laps to go, the lead trio had a lead of more than three seconds. Aegerter increased the pressure on Zaccone at the front and showed himself next to his bike a few times, but couldn’t find a way past.

On the final lap, Aegerter then had to catch a violent slide in turn 5. That gave Zaccone enough breathing space to bring victory safely to the finish line. “I knew that I was fast and that I could fight for the podium – but to win?”, Said Zaccone, surprised by his victory.

“After Granado’s crash I was in front. It was only five laps, but the race seemed to take forever,” admits the Italian. “I’m very happy. Thanks to the team that believed in me after a difficult year with injuries. This is a good place to start now. I think we’ll have a lot of fun.”

“I am satisfied with the start”

Aegerter was able to maintain second place in the end against Torres – albeit a close one. At the finish, the two were only 0.195 seconds apart. “We had a bit of trouble this weekend,” reports the Swiss and is self-critical: “Maybe I wanted too much because I was very quick in the test.”

“I had a good start and controlled the pace and position. Then Eric fell. I tried to overtake Zaccone on the last lap, but I almost got a highsider because I opened the gas too early. I still did Took home second place. I’m happy with the start. “

Torres, overall winner of the previous year, could also live well with his third place. “I didn’t think of a podium, but it worked,” said the Italian from the Pons team. “We only thought about collecting points this weekend. We have to get to know and understand the bike better.”

Matteo Ferrari with a strong chase to catch up

Mattia Casadei crossed the finish line more than four seconds behind the top 3 drivers. He finished fourth ahead of Miquel Pons, who completed the top 5. Matteo Ferrari, who had to start from the back because of a canceled qualifying lap, showed a strong chase and came in sixth.

Hikari Okuba, Andrea Mantovani, Maria Herrera and Yonny Hernandez took the remaining top 10 places. The last points were collected by Jasper Iwema, Andre Pires and the fallen Granado and Zannoni in positions eleven to 14. Four drivers did not see the checkered flag. The next MotoE race will take place on May 16 in Le Mans.