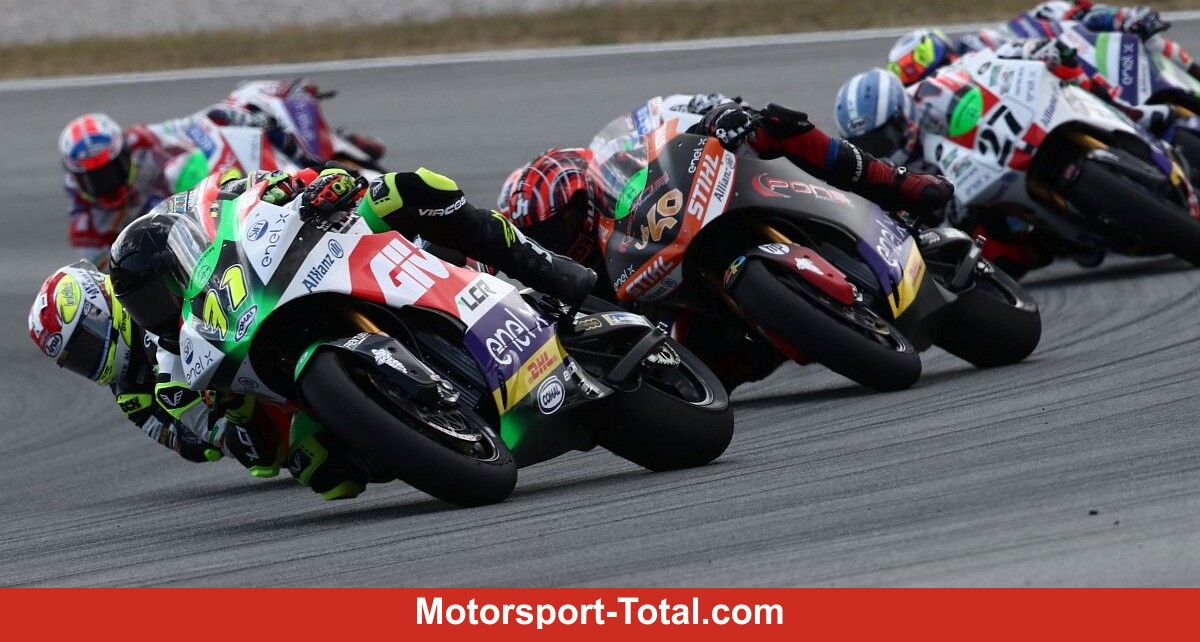 (Motorinformed.com) – The Spaniard Miquel Pons (LCR) has won the MotoE race at the Circuit de Barcelona. In a spectacular run with many overtaking maneuvers, the 23-year-old prevailed against veteran Dominique Aegerter (IntactGP) and defending champion Jordi Torres (Pons). The German Lukas Tulovic (Tech 3) finished eighth (on the race result).

“I am very happy,” said Pons happily at the finish. He also contested a Moto2 race in Portimao this year. “It was an exciting race that ended with my first win. I dedicate this victory to my family and Jason [Dupasquier]. “

The electric motorcycle race has been shortened to six laps. Pole man Eric Granado (One Energy) raised his hand on the grid. Technical Director Danny Aldridge ran over and indicated that he had to push his motorcycle into the pit lane.

Then the start-up procedure was interrupted because of the confusion. The mechanics hurried back to the grid with the electric blankets. The race finally started six minutes late. Granado had to drive out of the pit lane.

Aegerter won the holeshot and led in the first corner in front of Alessandro Zaccone (Pramac), Torres and Tulovic. Xavi Cardelus (Esponsorama) crashed in the third corner. The drivers showed some overtaking maneuvers.

In the course of the first lap, Pons worked his way up to second place behind Aegerter. At the beginning of lap two, Zaccone grabbed the lead from the Swiss. Pons also drove aggressively and attacked. After the Spaniard was able to overtake Aegerter, he put pressure on the leading Zaccone.

The slipstream played a major role on the long straight. At the beginning of lap three, Aegerter shot to the front of the field again. One lap later he lost the lead on the home straight to Zaccone. It stayed exciting.

Pons made everything clear in the last lap

When the penultimate lap began, the order was Pons, Aegerter, Torres and Zaccone. With the heavy motorcycles from Energica some overtaking was done like in the Moto3 class. Pons did not allow any more attack in the closing stages and celebrated his first MotoE victory.

On the finish line, Aegerter was half a second behind Pons. The Swiss successfully defended second place against Torres. “I have to say that it was a difficult week after Jason’s death,” says Aegerter.

“I fought in the race. Of course I tried to defend my position, I also tried to win the race. The bottom line is that these 20 points are important.” Next weekend he will be in action in the World Supersport Championship in Misano.

Zaccone finished fourth and continues to lead the World Cup standings. The lead over Aegerter has shrunk to one point (compared to the overall ranking). Ex-MotoGP rider Yonny Hernandez finished fifth. Tulovic lost positions in the early stages and saw the checkered flag in eighth place.

Matteo Ferrari was moved back one position due to track limits in the result. It was seventh place for the first MotoE champion. The messed-up day ended for Granado with a fall in turn four.

The next race of the MotoE World Cup will take place on June 27th in Assen (Netherlands).