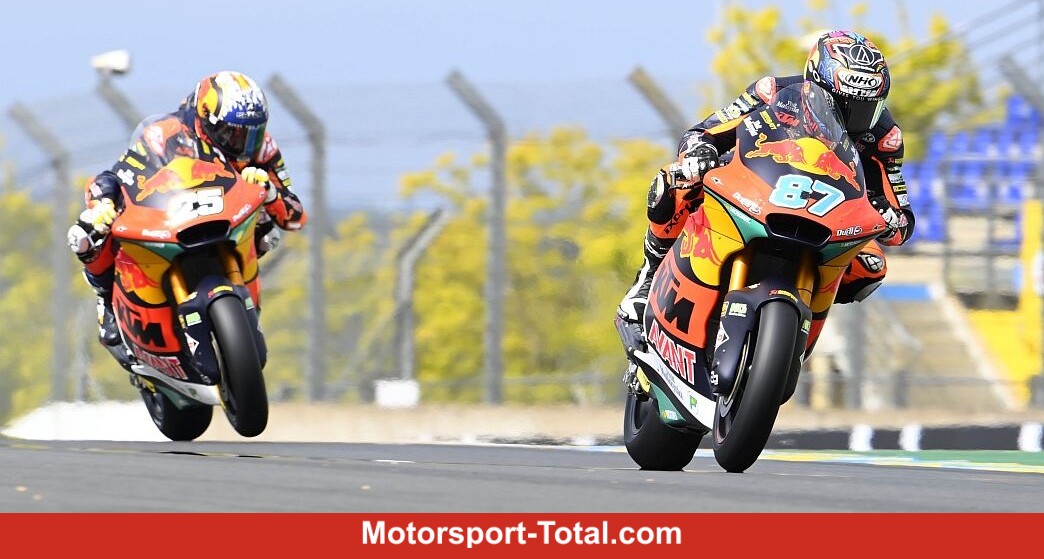 (Motorinformed.com) – The Ajo team continued their dominance in the Moto2 class at the Grand Prix of Catalonia. Remy Gardner and Raul Fernandez determined the race at the Circuit de Barcelona-Catalunya. Gardner kept the upper hand and celebrated his second win of the season in a row after Mugello (on the race result).

For the second time Gardner prevailed against Raul Fernandez
zoom

In doing so, he expanded his World Cup lead to eleven points. Xavi Vierge was third on the podium. The German Marcel Schrötter finished eighth in the top 10. Tom Lüthi from Switzerland collected one World Cup point (for the overall World Cup standings).

Pole-setter Gardner took the lead over 22 laps right at the start of the race. For a short time, Bo Bendsneyder finished second. The Dutchman was quickly overtaken by Raul Fernandez, who was hunting his Ajo team-mate.

Ajo-Duo drives its own race at the top

As a result, a duel between the two KTM juniors developed again. Gardner led, Raul Fernandez stuck to the rear wheel. At halftime, Fernandez overtook Gardner in turn 1 and was ahead for the first time. The duo turned identical lap times.

Seven laps before the end of the race, Vierge grabbed third place from Bendsneyder. Shortly afterwards, Marco Bezzecchi also drove past the Dutchman. However, these pursuers could no longer intervene in the duel for victory.

Gardner stronger in the closing stages

With three laps before the end of the race, Gardner overtook Raul Fernandez in turn 1. The latter had already received a warning about track limits. Gardner immediately set the fastest lap. That was the decision. Next year’s MotoGP rider took home the victory with confidence (look up all the action in the ticker!).

“At the beginning I tried to drive away, but I didn’t want to burn the rear tire,” said Gardner, describing his race. “That’s why I drove more gently. I didn’t know who was behind me. Then Raul attacked and I said to myself, okay, then I’ll follow you.”

“He didn’t move away. I managed the tires behind it and knew that I had a little more inside me. I then had time to study him. Two laps before the end of the race, I wanted to overtake him and pull away. When I got the chance in the corner 1, I pulled it off. “

Despite the defeat, Raul Fernandez was not too disappointed, as he achieved a podium finish for the first time in his home race. “Remy was stronger,” admits the Spaniard without envy. “I hope I can fight him in the future because it wasn’t possible today.”

Vierge was third for the first time since Argentina 2018 on the podium. Bezzecchi crossed the finish line in fourth. The Italian is third in the World Cup. His gap to Gardner grew to 38 points.

Augosto Fernandez followed in fifth. Bendsneyder fell back to sixth in the final third of the race. Sam Lowes didn’t play a role in the top field this time and crossed the finish line in seventh place. Behind them Marcel Schrötter came eighth.

In the final phase, the German had a clear view of a dangerous situation in front of him. At the beginning of the penultimate lap, Fabio di Giannantonio crossed the line during the braking phase for turn 1 and collided with Hector Garzo. Both flew into the gravel and luckily remained unharmed.

The next Grand Prix will take place on June 20th in Germany at the Sachsenring.