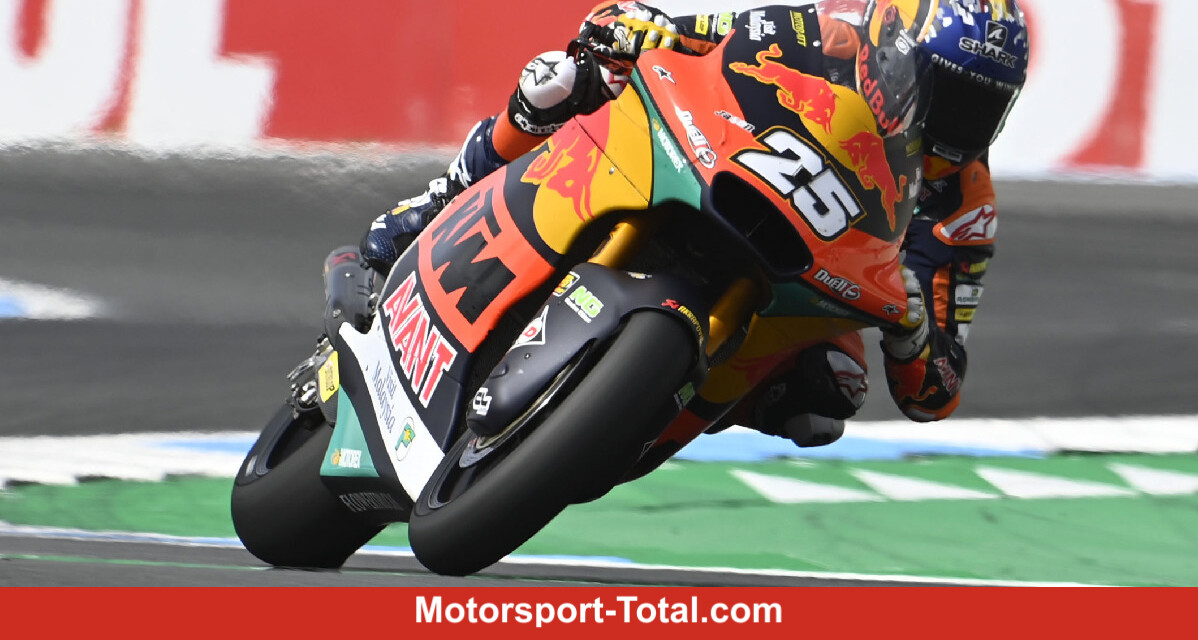 (Motorinformed.com) – Compensation after the failure at the Sachsenring: Raul Fernandez wins in Assen and celebrates the third victory of his Moto2 rookie season. After a difficult start phase, the Kalex driver clearly prevailed against Ajo team-mate Remy Gardner and Augusto Fernandez, who completed the podium.

Raul Fernandez fought his way back after a difficult start
zoom

There was bad news before the race for Hector Garzo, who was still strong in qualifying yesterday with fifth place on the grid. However, due to a positive corona test, he was unable to take part in the race and was condemned to watch.

Aron Canet decided the start for himself, pole setter Raul Fernandez fell back to fourth behind Lowes and Gardner. The first falls occurred during the course of the first lap: Lorenzo Dalla Porta and Tony Arbolino went down independently of each other. Arbolino was then checked through at the Medical Center.

Raul Fernandez falls far behind after making a mistake

In the lead, Gardner took the lead for the first time on lap two, while his team-mate Raul Fernandez fell further back due to a mistake. Among other things, he lined up behind Marcel Schrötter, who was sixth after a strong start, but soon lost a few positions again.

Raul Fernandez, on the other hand, was able to fight his way back to the front within a very short time, while a three-way battle between Gardner, Lowes and Augusto Fernandez broke out at the front. This enabled the pole setter to close the gap.

After only ten laps it was Raul Fernandez’s turn and then grabbed one opponent after the other to take the lead for the first time with seven laps left. With a clear run, the Spaniard managed to open a gap immediately, which in the meantime grew to a minute and a half.

This meant that the Moto2 rookie could no longer be deprived of victory. In the battle for second place, Gardner prevailed against the Marc-VDS duo and secured the Ajo team their fourth double victory of the season. The second team duel behind was decided by Augusto Fernandez for himself. Lowes had to be content with fourth place.

“I’m pretty exhausted,” admits Raul Fernandez after his hard-fought victory. “At the beginning I made a mistake and I had to catch up. Many thanks to my team for the first-class motorcycle.” In the season’s victories, he drew level with Gardner.

For him there was nothing more than second place: “It wasn’t perfect, but I got the best out of it today. I was missing a few tenths of a second today. So I knew that victory today would be difficult. As Raul over once and got a head start, I couldn’t do anything anymore. “

For Augusto Fernandez it was the first podium since Misano 2019: “It took a long time! The past two years have been really difficult. In the meantime, I thought today that I could win the race. In the end, however, I am satisfied with the podium. Thank you very much all to my family. This result is for them. “

The other pursuers could not keep up with the pace of the top 4 early on. Marco Bezzecchi crossed the finish line in fifth, 6.450 seconds behind the race winner. Behind them were Ai Ogura, Jorge Navarro (the only Boscoscuro driver in the top 10), Xavi Vierge, Marcel Schrötter and Celestino Vietti.

The remaining points went to Somkiat Chantra, Albert Arenas, Stefano Manzi, Tom Lüthi and Bo Bendsneyder. The latter had to take a long lap penalty after an early start, but at least scored a point in his home race.

A total of 24 drivers saw the checkered flag. After the early falls of Arbolino and Dalla Porta, Joe Roberts, Fabio Di Giannantonio and Aron Canet also fell. In the World Cup, Raul Fernandez was able to reduce the gap to overall leader Gardner to 31 points. Bezzecchi is third, 56 points behind.