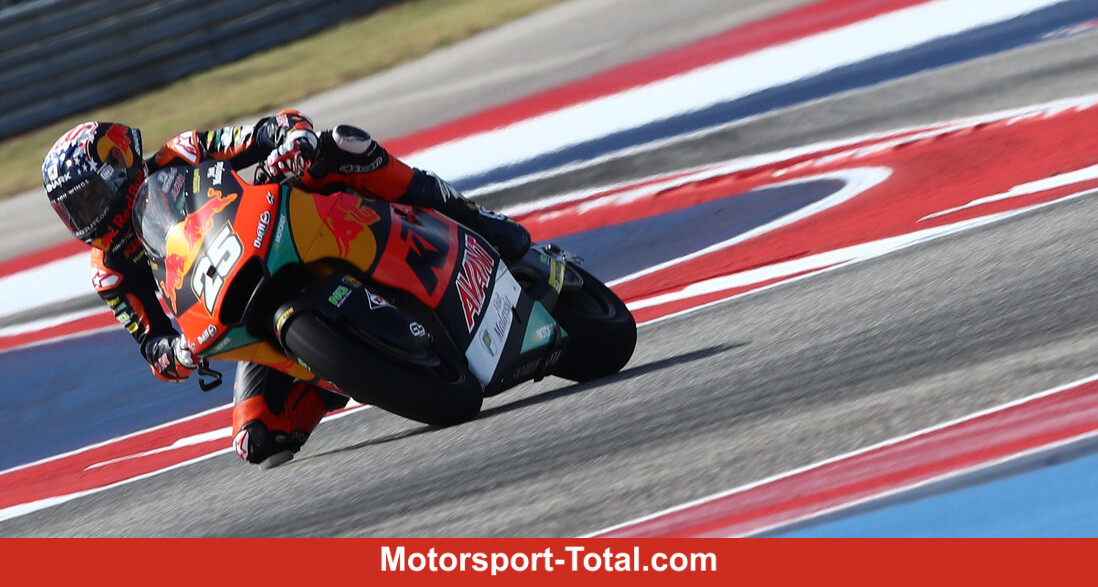 (Motorinformed.com) – The Ajo duo lived up to the role of favorites in qualifying for the US Grand Prix at the Circuit of The Americas in Texas. Raul Fernandez secured pole position with 2: 08.979 minutes ahead of his team-mate Remy Gardner. Neither Marcel Schrötter nor Tom Lüthi made it into Q2.

Raul Fernandez was already the fastest driver in the free practice sessions. In qualifying, the Spaniard had Gardner under control and kept the championship leader at a distance of three tenths of a second. Gardner has to defend 34 championship points in the remaining four races.

For Moto2 rookie Raul Fernandez it was the sixth pole position this year and the second in a row. The first row was completed by Fabio di Giannantonio, who was almost half a second behind (Q2 result).

Places four to six on the second row went to Marco Bezzecchi, local hero Cameron Beaubier and Augusto Fernandez. Behind it, Tony Arbolino, Ai Ogura and Albert Arenas will line up in row three.

Five minutes before the time was up, Sam Lowes crashed into Turn 3. Therefore, the Briton did not drive a fast lap and qualified in 16. Jorge Navarro also had another crash in Turn 11 in an important session (look up all the action in the ticker!) .

In the first section, Marcos Ramirez set the best time with 2: 09.652 minutes. The American Racing driver was three tenths of a second faster than Celestino Vietti and Somkiat Chantra. Fourth, Arbolino, a driver from the German IntactGP team, made it into Q2 (Q1 result).

Schrötter was 0.101 seconds slower than his teammate Arbolino. The German took fifth place. That means starting position 19 for Sunday. When he last visited Austin in 2019, Schrötter was still on pole position.

“Of course I’m not in a good mood,” says Schrötter. “I am very disappointed. It has not been an easy weekend so far. We had hoped that I would be a little further ahead here on this track where I always drove well in the past. But that didn’t work out.”

In 2019, Marcel Schrötter started from pole position Zoom in Austin

“I’m just mega disappointed with how things are going at the moment. It’s a long season and you get tired of one disappointment following the other. I just don’t enjoy driving. Hopefully we’ll find something so that I can find more confidence and faster will.”

Things went even worse for Lüthi, who celebrated his last Moto2 victory on this track in 2019. The Swiss was one and a half seconds behind and only qualified in 28th and penultimate place.

For one driver, the race weekend was over on Saturday. Nicolo Bulega fell in the morning. He then complained that his left leg was not feeling good. Closer examination revealed a hematoma in one muscle. Therefore, Bulega was declared unfit.

Yamaha needs to maintain Quartararo in 2023 – GP Inside
Loeb will now not have Elena as a rally co-driver
Maximilian Kofler is moving to the Supersport World Cup in 2022
MotoGP, Ducati Pramac appoints Francesco Guidotti’s alternative
McLaren indicators Kirchhofer to manufacturing unit GT deal