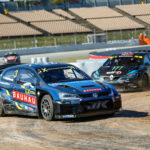 The German round was to be the last of the season, mid-December, but the coronavirus pandemic got the better of the first Rallycross on the Nürburgring. So, after 4 runs (finally 4 double runs) it’s Johan Kristoffersson which is titled. KYB Team JC (JC Raceteknik) wins the “constructors” title. For the last WorldRX season with IMG as promoter, it cannot be said that Rallycross fans will be marked by this 2020 WorldRX season.

Unlike Eurosport Events for the ERC or even the FIA ​​with the WRC, IMG did not really know how to plan a plan B for this 2020 season of the WorldRX. Double heats and the return of Finland have come to allow WorldRX to be able to exist (survive?) This year. Unfortunately, cancellations have been linked for this end of the season. So much so that EuroRX (Supercars and Super1600) will be entitled to a nice blank page. Indeed, IMG was unable to fit the 3 rounds required by the FIA ​​on its mini WorldRX calendar. Yuri Belevskiy (Super1600) and Oliver Eriksson (Supercar) therefore cannot be titled. It’s really very unfortunate when you see the commitment of players in these categories to still be present this year …

In WorldRX the title therefore comes without surprise to Johan kristoffersson. The Swede clinches a third crown after those won in 2017 and 2018. Mattias Ekström’s Audi S1 ​​EKS will not have been able to counter Kristoffersson’s Polo “WRC”. Small consolation prize for KYB Team JC, who entered the Audi this year, with the “teams” title. Note that Mattias Ekström will not return in 2021, at least not for a full season. Indeed, the Swedish will focus on Extreme E with ABT.

Mattias Ekström won a third world rallycross vice-champion title after those won in 2017 and 2018. The Swedish finished 27 points behind his compatriot. Defending champion Timmy Hansen finished third 56 points behind the champion. As in 2020, Niclas Grönholm fails in fourth place despite a victory. Andreas Bakkerud, unfortunate vice champion in 2019, finished seventh this season, 1 point behind Robin Larsson (6th). The Norwegian has been able to achieve some great things all the same behind the wheel of a Renault Mégane RS RX which is not always reliable.

The WorldRX 2021 has been confirmed by the FIA ​​although no promoter has yet taken over from IMG. Electric should be a big part of the championship. This is why we can only be even more disappointed to see this mini 2020 season cut off from its final test, in Germany. See you next year, we hope with all our hearts, for a more competitive season!