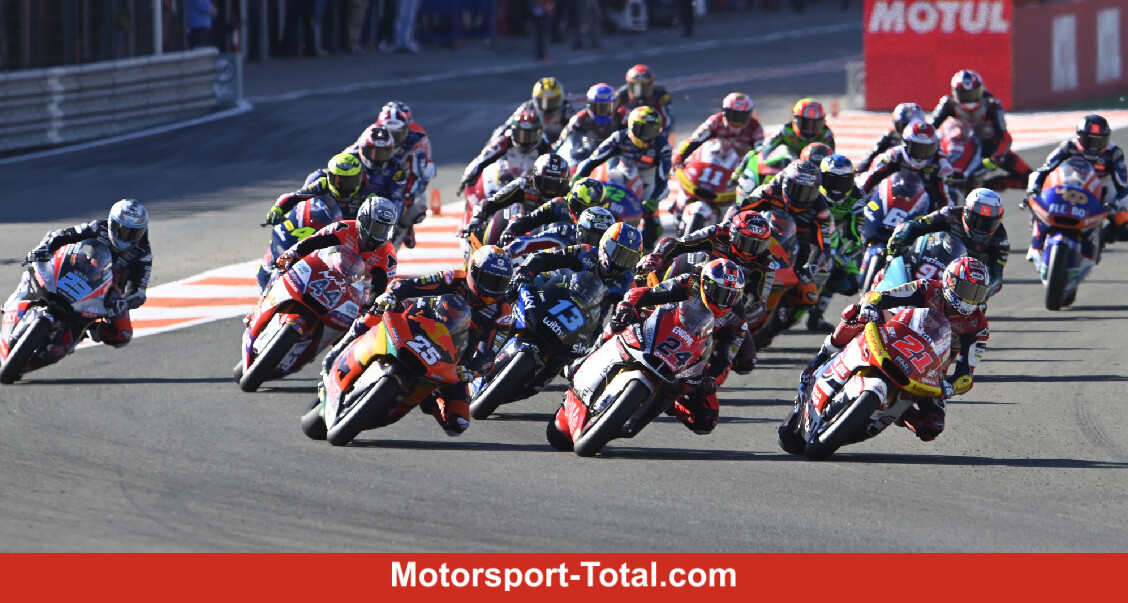 (Motorinformed.com) – The Moto2 World Championship as the middle class of the Motorcycle World Championship has 15 teams with two drivers each in the upcoming 2022 season. Yet there is a new team in the field while another is disappearing at the same time.

A lot is new in the Moto2 field for 2022: a new team, ten rookies, various changes
zoom

The Petronas team withdraws. Therefor there is in the form of the team supported by Yamaha VR46 Master Camp a new racing team. However, he does not rely on Yamaha bikes, but on the by far most widespread brand in the Moto2 class, namely Kalex. Regardless of the entry of the VR46 Master Camp Team, the well-known VR46 team of the Moto2 class will continue to exist.

In relation to the line-up of the teams for the Moto2 season 2022, the rider line-up for only two teams remains the same as it was in the 2021 season: Italtrans and Honda Team Asia, the latter also using Kalex bikes and not with Honda bikes.

In terms of drivers, there will be ten rookies in the Moto2 season 2022 who will either be promoted or entered from the Moto3 class or from other junior classes. The list is headed by Moto3 world champions Pedro Acostawho is promoted to the Moto2 class within the Ajo team.

Even Niccolo Antonelli is a Moto2 rookie. Coming from the Moto3 class, it docks with VR46. Filip Salac, Who will also be competing in the Moto3 field in 2021, will have his Moto2 rookie season for Gresini in 2022. Also Salac’s teammate Alessandro Zaccone is a newcomer to the class. He comes from the MotoE World Cup.

Jeremy Alcoba and Gabriel Rodrigowho competed as teammates for the Moto3 team Gresini in 2021 will compete in the Moto2 class for Intact and SAG in 2022. Romano Fenati is also switching from the Moto3 to the Moto2 class. The Italian, who drives for Speed ​​Up, is not a rookie in the true sense of the word, as he was already in the middle class in 2018. As a result of the Misano scandal, however, Fenati went back to the Moto3 class for three years.

A Moto2 rookie in the true sense of the word, although he has already contested a race in this class as a wildcard driver Sean Dylan Kelly. The current champion of the Supersport class under the MotoAmerica banner initially drove for American Racing in 2019 in Valencia. In 2022 he will drive the full season for the team and together with Cameron Beaubier will be a pure US team.

A rookie with a famous last name is Zonta van den Goorbergh. The son of the former MotoGP rider Jurgen van den Goorbergh docks with the RW racing team. And last but not least, the two riders in the VR46 Master Camp Team are, just like the team itself, newcomers to the Moto2 World Championship. It is a matter of Manuel Gonzalez from Spain and Keminth Kubo from Thailand.

Apart from the numerous rookies, there are still a few drivers in the Moto2 field for the 2022 season who change teams within the class: Augusto Fernandez (from Marc VDS to Ajo), Tony Arbolino (from Intact to Marc VDS), Jake Dixon ( from Petronas to Aspar), Jorge Navarro (from Speed ​​Up to Pons) and Marcos Ramirez (from American to Forward).

Forward will also rely on MV Agusta as a motorcycle brand in 2022. Two other teams, however, are changing brands: Aspar, Jorge “Aspar” Martinez’s racing team, is starting the new season GasGas instead of Boscoscuro. And Jarno Janssen’s Dutch RW racing team is switching from NTS to Kalex. This means that the NTS brand disappears from the motorcycle world championship.

Teams and drivers for the Moto2 season 2022

V1.8 with BMW M4 GT3 and further developments
again on the Rufea observe
The USA may have their pre-GP championship – GP Inside
Kyalami 9 Hours postponed after new pressure of COVID detected
Susie Wolff appointed CEO of Venturi Formulation E group