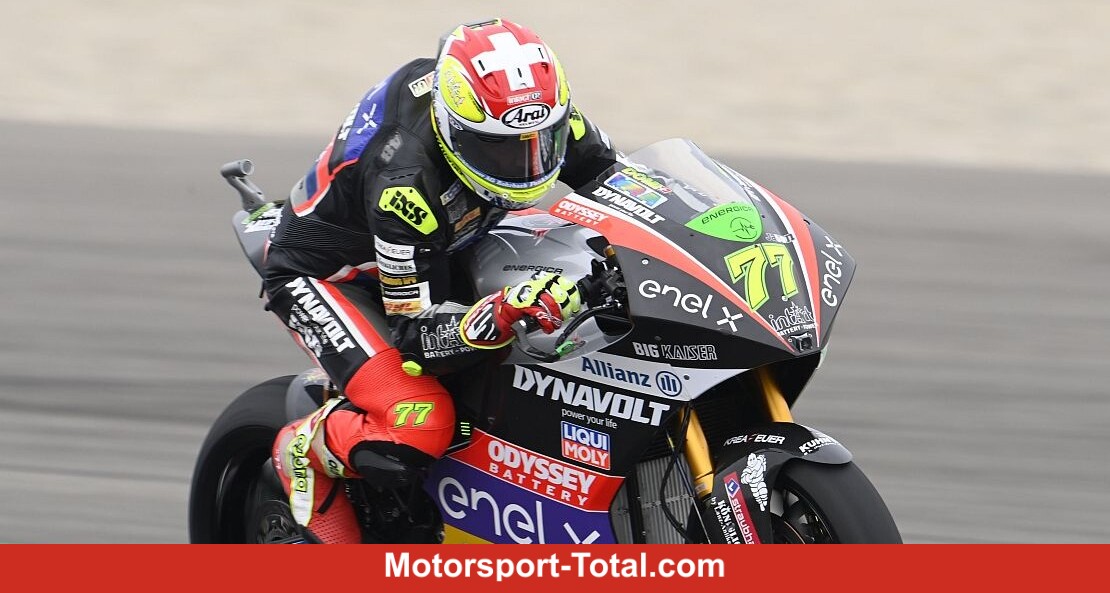 (Motorinformed.com) – Heartbeat finale in the last MotoE race of the season: After a collision on the final lap, which resulted in Jordi Torres falling, Dominique Aegerter crossed the finish line first, but lost the race victory again because of a penalty and fell apart Twelfth place back. That makes Torres the 2021 World Cup winner.

But let’s start from the beginning: The start of the eight lap race was initially decided by Mattia Casadei, who was still in the lead on the first lap at Torres. Both could quickly open a gap, also because the pursuers kept overtaking each other.

Aegerter managed to swim free after the first few laps. Past Casadei, he took up the chase and was able to minimize the gap to Torres, so that a bitter duel for victory broke out in the last three laps.

The decisive scene came in turn 14 of the final lap: Aegerter braked late to pass inside, but could not hold the line. There was contact with Torres, who hung himself on the rear of Aegerters bike and fell. Aegerter was able to continue and save first place from the approaching pursuers to the finish.

His jubilation over the victory, which also meant the lead in the overall World Cup, did not last long. The race stewards gave the Swiss driver a drive-through penalty, which was converted into a 38-second time penalty.

With that, Aegerter fell back to twelfth place and was only one position ahead of Torres, who was 13th after his fall. With 100 points and seven points ahead of Aegerter, he managed to defend his title.

“I wanted to close the door in every corner. I knew that Dominique really wanted to win,” commented Torres in Parc Ferme. “He’s already done two or three aggressive maneuvers. On the last one he was aiming for a collision. I tried to avoid him, but that was difficult.”

With all the drama, the final race result was almost a minor matter. After Aegerters penalty, Matteo Ferrari inherited the victory – for the MotoE overall winner of 2019 it was the first of this season. Casadei and Miquel Pons completed the podium.

Kevin Zannoni and Eric Granado followed in fourth and fifth. For Lukas Tulovic, after an early fall, no more than 15th place was possible. Alessandro Zaccone missed out on Saturday’s race after his serious fall. He had led the overall standings before the MotoE season finale in Misano.

How Williams helped a MotoGP legend after his personal life-changing accident
“The 12 months of my life by which I’ve progressed essentially the most”
Tributes paid to F1 legend Sir Frank Williams
the journey of Sanz-Gerini and Carlos Checa
GoPro: Tim Gajser 2021 FIM MXGP R18 Mantova Moto 2