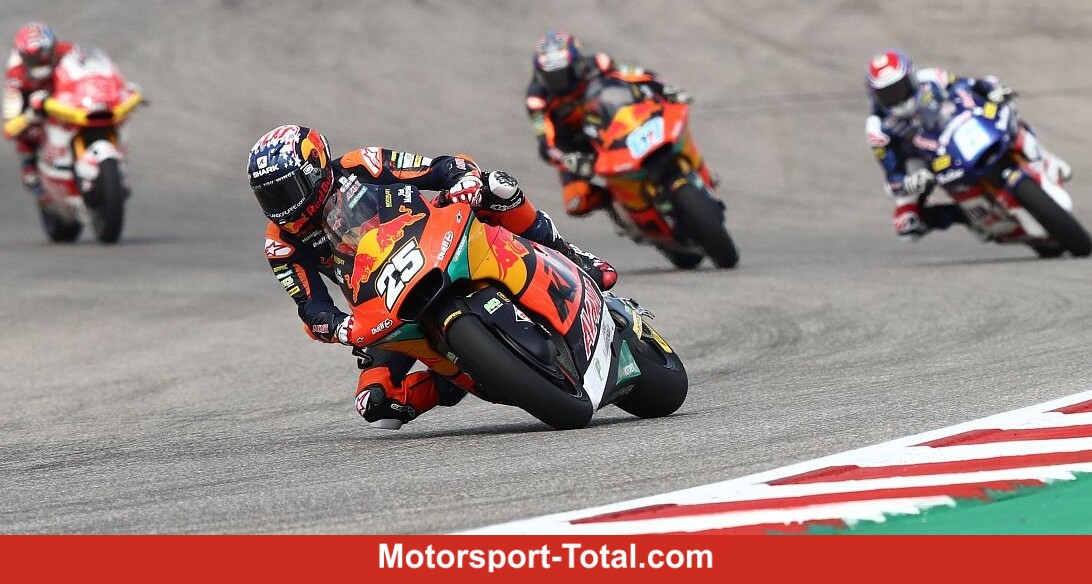 (Motorinformed.com) – The World Championship duel in the Moto2 class is exciting again. Remy Gardner made his first big mistake of the 2021 season at the US Grand Prix and was eliminated by a fall. At the same time, his Ajo team-mate Raul Fernandez celebrated his seventh win of the season (result). As a result, the Spaniard is only nine points behind in the World Cup (World Cup ranking).

“It was a very difficult race because it was so hot,” said Raul Fernandez after his third triumph in a row. “I’m very happy about the win. It is for Dean [Berta Vinales]. After all, he also drove with my start number. This victory is for him, his whole family and all his friends. “

With this seventh win, Moto2 rookie Raul Fernandez equaled a record from Marc Marquez. In the 2011 season, Marquez had also won seven races in his first season in the middle class.

At the start of the 18-lap race, the Ajo duo immediately took the lead. Behind them were Fabio di Giannantonio, Marco Bezzecchi and local hero Cameron Beaubier. The American showed an aggressive early phase and fought with the established drivers.

Raul Fernandez quickly had a lead of one second, while Gardner fell behind di Giannantonio and Beaubier in fourth place. The Australian stayed cool and took back second place.

Beaubier did not give up and attacked Gardner again. The American made small mistakes and fell back to fifth. After five laps, Raul Fernandez was one second ahead of Gardner, di Giannantonio, Bezzecchi and Beaubier.

In round 6, a crucial situation for the World Cup took place. Gardner fell on Turn 15. The marshals pushed him, but the Triumph engine stopped. It was Gardner’s first retirement that year.

After eight laps the field was sorted. Raul Fernandez’s lead had increased to two seconds. Second was di Giannantonio, who in turn had a second advantage over the chasing group with Bezzecchi, Beaubier and Tony Arbolino.

Di Giannantonio put pressure on, but he couldn’t catch up with Raul Fernandez. For di Giannantonio, second was the first podium since his victory in Jerez. Bezzecchi finished third for the first time since Silverstone on the podium.

Augusto Fernandez worked his way up to fourth place. Beaubier captured his first top 5 result in front of his fans. Behind them were IntactGP riders Arbolino, Ai Ogura, Xavi Vierge, Marcos Ramirez and Jake Dixon.

The other World Cup points took Aron Canet, Jorge Navarro, Simone Corsi, Somkiat Chantra and Bo Bendsneyder with them. Joe Roberts, the second American, came away empty-handed in his home race. A total of 22 drivers saw the checkered flag.

Marcel Schrötter has to give up at the pits

Five laps before the end of the race, Schrötter headed for the pits and parked his Kalex. There was a technical problem, his mechanics pressed the buttons on the left handlebar grip. Misfires could be heard acoustically.

The German Marcel Schrötter had a technical problem Zoom

Sam Lowes also gave up on the pits. The Brit had electronic problems from the first lap. For Tom Lüthi, the Grand Prix was over early. At the end of the third lap, the Swiss crashed into turn 19. Two years ago, Lüthi celebrated his last victory in Austin.

Albert Arenas crashed at the exit of the finish curve and was lucky that the following riders were able to evade. The Spaniard immediately opened his leather suit and held his right shoulder. A crash from Celestino Vietti was less severe.

The next race will take place on October 24th in Misano (Italy).