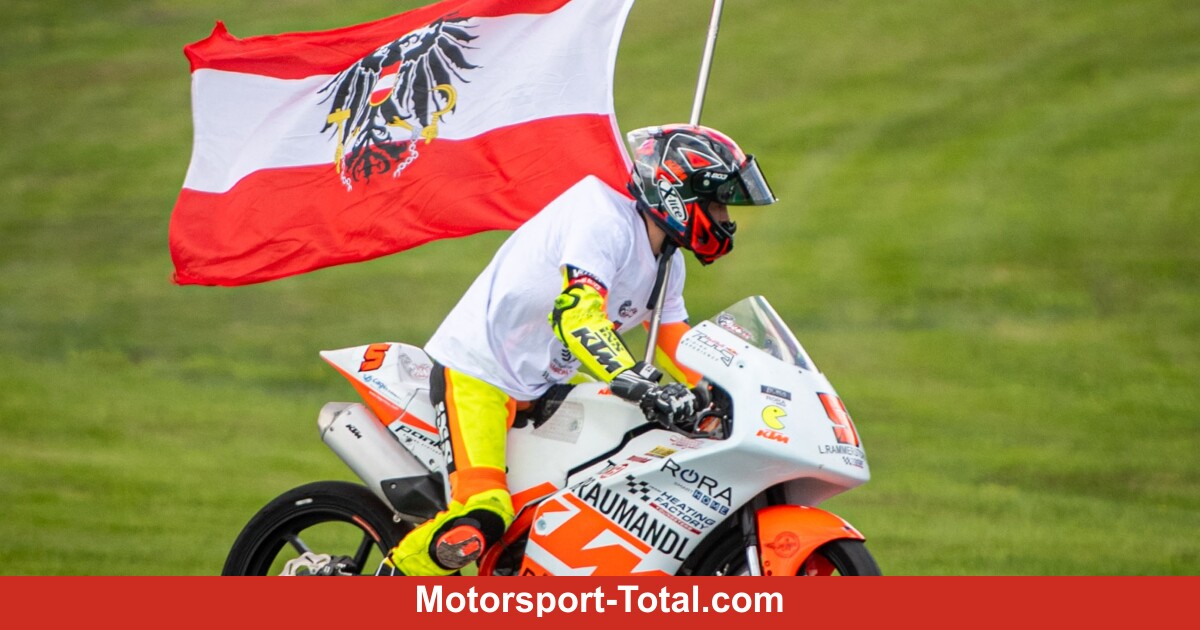 (Motorinformed.com) – The year 2021 brought a new start in promoting young motorcycle talent in Austria. For the first time, the Austrian Junior Cup (AJC) was held for young drivers between the ages of 13 and 20. From 2022, the funding will be supplemented with a MiniGP series as a substructure.

In the AJC, the KTM RC4R is used, which is also used in the Northern Talent Cup (NTC). There were a total of five racing events in the Rechnitz Speed ​​Arena, on the Salzburgring, on the Wachauring and twice on the Red Bull Ring.

At the Grand Prix of Styria, the AJC competed in the MotoGP supporting program together with the NTC. The second event in Spielberg then took place as part of the IDM. One driver in particular left his mark on the season.

“We were sure there was something slumbering in Austria,” says ex-racing driver Andy Meklau, who shares his experience with the AJC as a riding coach. “When the ‘Go’ came, we didn’t know what to expect in terms of drivers.”

“Lo and behold, we’ve definitely found some who have what it takes to take the next steps. The way up is tough, but I hope that in a few years we’ll have an Austrian MotoGP at the Red Bull Ring -Starters can cheer. “

The Austrian Junior Cup will then continue in 2022 with six races in Austria and neighboring countries. Applications for this will start in autumn. Further information can be found at www.austrianjuniorcup.at.

In Austria, the foundation for the international promotion of young talent is being built. From the Austrian Junior Cup, the route via the Northern Talent Cup or the Red Bull Rookies Cup can continue towards Moto3, where KTM and Red Bull are positioned up to MotoGP.

MiniGP Austria as the first step into racing

Establishing the AJC was only the first step. From 2022, the portfolio in the Alpine republic will also be supplemented by a MiniGP series in order to introduce young talents to motorcycle racing even earlier with professional support.

The FIM MiniGP Austria Series is intended for talents between the ages of 10 and 14. Identical motorcycles will be used. The Ohvale GP-0 160, which weighs just 65 kilograms, has a single-cylinder four-stroke engine that develops around 15 hp with a displacement of 160 cubic centimeters.

In the MiniGP series, the Ohvale GP-0 160 is used worldwide. Zoom

In 2021 the FIM MiniGP World Series was launched as part of the “Road to MotoGP”. The aim is to create an equal platform worldwide so that young riders can get into motorcycle racing.

MiniGP competitions from all over the world are thus combined and standardized. These include national championships in France, Indonesia, Ireland, Italy, Malaysia, the Netherlands, North America, Portugal, Spain, Great Britain and the Alpe-Adria region.

From 2022 there will also be the minibike championship with five racing events in Austria. Like the AJC, it is organized by BG Sportpromotion. The ambassador of MiniGP Austria is Gustl Auinger, who has gained a lot of experience in promoting young talent in the Rookies Cup.

“We have neglected this sport in Austria for decades, now the tide has turned,” says Auinger, who won five grands prix in the 125cc World Championship. He sees the MiniGP as the ideal entry-level class.

“The Ohvale minibikes are the perfect opportunity for young people to learn in a playful way whether riding a motorcycle is fun and whether you have the talent for it. For many years I dreamed of seeing something like this in Austria. Now it’s finally so far!”

Five MiniGP events are planned in Austria next year. The exact calendar has not yet been determined. Applications start in September. Further information can be found at www.minigpaustria.at.

After the 2022 season, the two best drivers will have the chance to face the international competition at the World Finals of the MiniGP 2022 in Valencia. The world final winner secures a place in one of the “Road to MotoGP” programs.

Austria has produced five Grand Prix winners since the motorcycle world championship was founded in 1949. Auinger’s last win dates back to Misano in 1986 in the 125cc class. Rupert Hollaus was the only world champion in the Alpine republic in 1954 (125cc class).