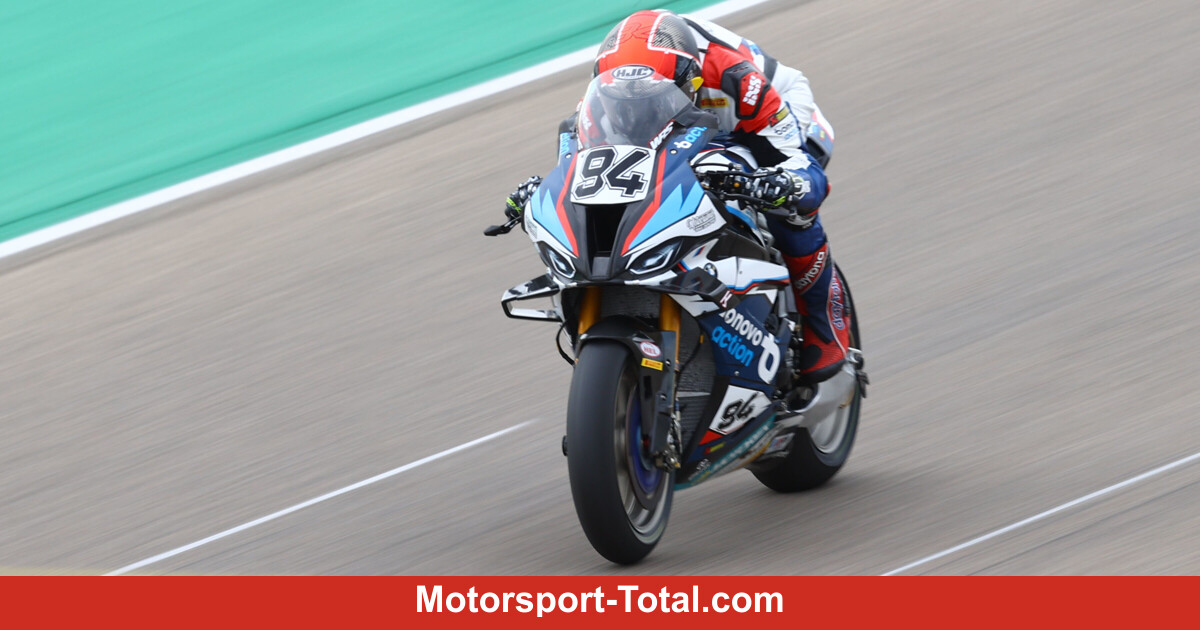 (Motorinformed.com) – The start of training at the WSBK weekend in Estoril was very promising from the point of view of Jonas Folger (BMW). The German maintained his position in the top 5 for a long time and has now set absolute best times in the sector. In the end, Folger landed in seventh place (on the FT1 result). The best time went to Yamaha works driver Toprak Razgatlioglu.

Jonas Folger was much more competitive than in Aragon
zoom

Exactly at 10:30 am, the 22 WSBK pilots started the first free practice session of the weekend. The BMW warehouse was already hectic at the beginning of the session. There was a technical problem with Michael van der Mark’s M1000RR.

The Dutchman returned to the pits immediately and had to be patient. Already in Aragon, Van der Mark missed valuable training time with the BMW, which was new to him, due to a fall and technical problem. Van der Mark was only able to get back into the action 18 minutes before the end of the session. But there was another problem. After just one lap, the BMW driver had to return to the pits in frustration.

Toprak Razgatlioglu (Yamaha), Scott Redding, Chaz Davies, Michael Ruben Rinaldi (all Ducati) and Jonathan Rea (Kawasaki) were quick from the start in the FT1. But Jonas Folger (BMW) also got off to a promising start to the weekend and was in the top 6 after the first stint.

At halftime in FT1, Scott Redding was leading the ranking. The Ducati works driver set the pace with a 1: 37.624 time. Jonas Folger was eighth and was a good second behind. In the second stint, Folger moved into the top 4 and presented himself much more competitive than at the season opener in Aragon.

Honda rider Alvaro Bautista crashes and only comes in 14th.

The weekend in Portugal did not start according to plan for Honda. Alvaro Bautista already made a trip into the gravel trap in the early days of the FT1 and missed a large part of the training time. The 2019 vice world champion struggled to make it into the top 10 with his factory Honda.

And HRC team-mate Leon Haslam also had a hard time. Five minutes before the end of FT1, Bautista crashed at Turn 11, but was able to return his bike to the pits on his own. The Spaniard finished the session in 14th position. Team mate Leon Haslam was twelfth.

In the final minutes, the lap times tumbled. Alex Lowes (Kawasaki) took the lead three minutes before the end of FT1. In the last minute, team-mate Jonathan Rea pushed himself into the lead. But Jonas Folger also recorded absolute bests in the sector.

Toprak Razgatlioglu storms to the top of the FT1 standings

Yamaha rider Toprak Razgatlioglu drove the first 1:36 lap of the weekend in the final attempt. With a lap of 1: 36.920, the Turk easily set the fastest time in FT1. Behind them followed the two factory Kawasakis of Jonathan Rea and Alex Lowes. Rea was the first chaser, however, already 0.581 seconds behind.

Scott Redding was the best Ducati rider in fourth. Eugene Laverty made it into the top 5 and was the best BMW driver. Chaz Davies followed in sixth position with his satellite Ducati. Jonas Folger asserted himself as seventh in the top 10, rounded off by Garrett Gerloff (Yamaha), Tom Sykes (BMW) and Michael Ruben Rinaldi (Ducati).

BMW works driver Michael van der Mark found himself in 16th position after the problems at the beginning of the FT1.

The second free practice in Estoril will start at 4:00 p.m. (CEST) (to the TV overview).

Vettel set to start out US GP on the again as Aston Martin plans F1 energy unit change
How high-tech F1 has modified the race engineer position
+30 for Razgatlioglu, Redding offside – GP Inside
Rossi not sure new MotoGP age limits “will repair all the issues”
Perez lucid and centered to play the sport of Verstappen