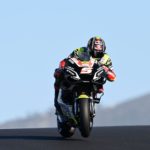 While hoping to end his 2020 season on a podium, also to end his adventure with Avintia on a high note, Johann Zarco failed in his quest. However, the start of the race seemed to prove him right, as to his ambitions. Unfortunately, the early degradation of his tires marked the end of his hopes, at MotoGP Portugal G.P.

Johann Zarco is still making progress, but there is still work to be done

Johann Zarco’s 2020 campaign with Avintia ended in tenth place. Not so bad, when you look at where the small team stood last year. However, the Frenchman was aiming better in knowing, a podium, which would have been the second of his season. However, a bad choice of tires – according to the interested party – will have put an end to the hopes of the French rider, as he explained after the arrival of the MotoGP Portuguese Grand Prix.

” The choice of tires seems to have been wrong. I really thought the left side could be a lot better for the whole race and give me some stability, but from halfway through I started to struggle on the left side and lap after lap that got worse and worse. There was a point in the race when I realized that it was going to be quite hard to keep my pace and a good position. The fight at the start was pretty good, and I’m happy to have the speed to stay with the front runners while feeling that I can still improve. So I’m going to work on myself and hope to get a good improvement for next year, but I’m clearly a little disappointed for this race because I lost too much time at the end.. “

” It’s a shame, because the start was good, and during the race I felt very good. I wanted to catch up with Pol and fight for fourth, but then I started wasting too much time on the left. I tried to compensate on the right, but it was not the right combination. It’s not just the tire. I think we have to work better to find better settings with the suspensions and to manage the use of the tires well. There is a combination between my style and the bike that is not yet perfectly done, but it comes: at least we can see that at each session I push well and I remain very competitive, so that means that we are in good shape. way, but that is not yet enough to be satisfied in the race. “

M-Sport reveals a colourful Ford Puma for the 2022 WRC
Loris Baz confirmed the worth of the MotoAmerica championship – GP Inside
Newgarden: No single issue explains Penske’s 2021 Indy 500 points
Why Penske has religion in its 2022 NASCAR Cup rookie
MotoGP, Vinales and Espargarò in Noale: breefing on the Aprilia RS-GP22