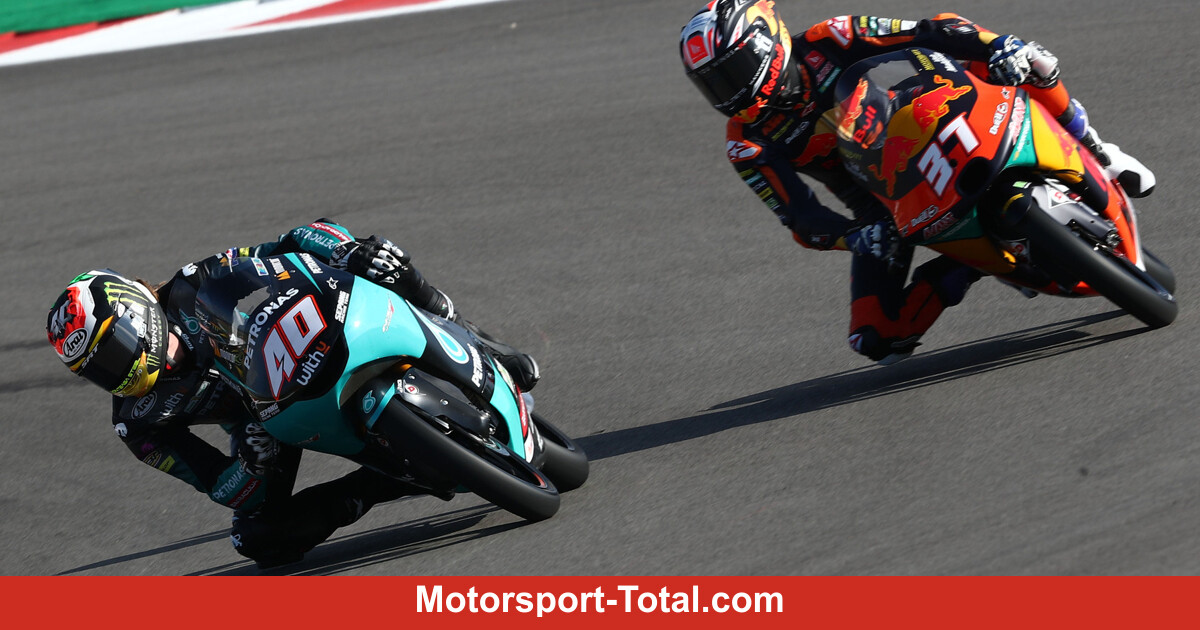 (Motorinformed.com) – The big topic of conversation at the MotoGP weekend of the Algarve Grand Prix in Portimao is not the victory of Ducati rider Francesco Bagnaia in the MotoGP race that was canceled prematurely. Rather, it is Darryn Binder’s maneuver against Dennis Foggia in the Moto3 race that decides the World Championship, which, through no fault of his own, robbed Foggia of his last chance for the title.

The maneuver happened on the last lap in Turn 3. Right there, World Championship leader Pedro Acosta sat inside next to his title rival Foggia and took the lead. Binder was fourth and launched an attack on his front man Sergio Garcia.

The South African braked so late on his Petronas-Honda that he tore Foggia, who was driving directly in front of Garcia, off his Leopard-Honda. Garcia also fell. Binder continued and crossed the finish line in fourth, but was immediately disqualified. The reason given by the race stewards was: “Irresponsible driving”.

Foggia, of course, does not use that. After a strong second half of the season, in which he had made up massive ground on championship leader Acosta race after race, his chance for the world title was shattered on the last lap of the penultimate race.

Acosta, who was still behind Foggia at the beginning of the last lap and could not be at all sure how the race would turn out, after Foggia’s accidental crash, crossed the finish line unchallenged as the winner. And with that, Acosta is sure of the 2021 Moto3 World Championship title. The 17-year-old Spaniard achieved this success directly in his rookie season.

But the big topic – not least in the press conference of the top 3 of the MotoGP race – is Darryn Binder’s maneuver. The younger brother of KTM rider Brad Binder will be promoted directly from the Moto3 to the MotoGP class in winter. In the new premier class season, he will be teammates with Andrea Dovizioso at RNF-Yamaha, the successor team to Petronas-Yamaha.

How do the MotoGP stars feel about Binder’s Portimao maneuver and its future? “I think we need a super license like in car racing,” is the first reaction from Francesco “Pecco” Bagnaia, the winner of the MotoGP race that took place directly after the Moto3 race.

“Unfortunately, what we saw today is normal,” Bagnaia criticizes Binder’s maneuver and is already thinking about 2022: “I know that this driver will drive in our class next year and I can only hope that nothing like that will happen then.”

But Bagnaia doesn’t just want to make the 23-year-old South African the scapegoat. Rather, the Ducati factory pilot, who has been MotoGP Vice World Champion 2021 since Sunday, addresses a larger context, namely the aggressive driving style in the Moto3 field, which has been a big topic for weeks anyway.

While Bagnaia is also in favor of a super license in two-wheeler sport, as has been the case for years in four-wheeler sport as approval for Formula 1, Joan Mir doubts whether such a regulation alone would solve the basic problem.

Mir, 2020 MotoGP World Champion and who finished P2 behind Bagnaia on Sunday in Portimao, says: “I’m not quite sure what to think of a super license. It may not be a bad idea, but we’ll have to wait and see .”

“In my opinion,” Mir continued, “the most important thing is that such maneuvers are penalized. And I don’t just mean that in relation to the respective race. There should be a race ban or even more. Because if not, then then something like that will happen again. Luckily nothing happened to Foggia and Garcia today, but of course it can’t be ruled out that something bigger could happen, especially in the Moto3 class with all the young riders.”

Jack Miller, third-placed in the MotoGP race, on the other hand, is not only critical of Binder, but also defensive. “Mistakes can happen. Incidents can happen,” says the Ducati rider, turning directly to Me: “You know how many times we’ve clashed this year.”

“But of course,” Miller continued, “what happened today in the Moto3 race wasn’t good. It wasn’t good for Foggia, who obviously lost. But it wasn’t good for Pedro either [Acosta], because it takes a bit of a backseat to his performance as a rookie this season. What happened robbed him of the feeling that he really fought for the title.”

Referring specifically to the young Binder, Miller says: “He needs to go to the ophthalmologist because he went into that corner with a lot more speed than he should have. But I also think I can speak for everyone, “When I say we all make mistakes. We’ll have to wait and see how next year goes. I’m not overly concerned because MotoGP is just a whole different level.”

At that moment, agreeing with Miller’s words, Mir interjects: “It’s not all Darryn’s fault. He’s certainly under a lot of pressure right now. He wants to prove why he got a MotoGP spot for next year. The pressure certainly doesn’t help him doing good decisions [auf der Strecke] hold true. We all make mistakes under pressure. A situation like this is not easy.”

Is the Binder maneuver in a different light because of the World Cup decision?

In this context, race winner Bagnaia also thinks of the race stewards. “I don’t want to have to decide how to handle a situation like this and how to deal with Darryn in this specific case.” As a reminder, Deniz Öncü was handed a two-race ban for an aggressive lane change at the Moto3 race in Austin that ended in a mass crash involving, among others, Acosta. The 18-year-old Turk will not be allowed to drive again until next weekend in Valencia.

Mir says about the situation around Binder on Sunday in Portimao: “I don’t think he should be banned for two races. And by that I mean what happened today.” Why does the Suzuki rider think like that after he himself had spoken out for aggressive Moto3 maneuvers a few minutes earlier for “more of a race ban or more”?

“We have to be careful. We’re probably making the situation a little bigger than it is because it decided the World Cup,” explains Mir. “Bottom line, it was a mistake [von Binder]. But of course it has to be seen somewhere as an example for the future to prevent something like this from happening again. I think some kind of punishment is needed, just for safety reasons.”

Stefan Bradl, who was at the Portimao weekend in place of Marc Marquez for the Honda works team, has his very personal opinion of Darryn Binder and the prospect that he will compete in the MotoGP field next year.

“I’m extremely sorry for Foggia, because he would certainly have launched an attack in the last lap. It went silly. It’s clear that Binder was involved again,” Bradl comments to ‘ServusTV’ and looks ahead to 2022: “He should watch out. If I’m there I’ll read him the riot act because it’s not the first time he’s pulled off a move like this. The lad needs to pull himself together, but I think he knows that.”

Jack Miller, however, takes the floor again in defense of Darryn Binder. After all, the Australian once moved up directly from the Moto3 to the MotoGP class and has thus completed exactly the climb that the young Binder will now, seven years later, make.

“Yes, Darryn might be a wild rider in some ways, or however you want to look at it. But again, we all make mistakes. And I know myself well how the pressure is when you come out of the Moto3 comes straight into the MotoGP class,” says Miller and knows: “He’s just at the beginning of what’s coming up.”

Miller reminds: Even Rossi and Co. not without mistakes

And Miller not only compares the young Binder to himself, but also to Valentino Rossi, whose long and successful MotoGP career comes to an end in Valencia next weekend. “We also saw it at the GOAT, with Valentino Rossi. He made mistakes like that too, and that after eight or nine world championship titles. That’s racing and accidents happen there. That has to be understood in principle.”

“Yes, if something like this happens week after week in the Moto3 class, then something must certainly be done,” says Miller, adding: “Öncü has been suspended for two races, but I don’t agree with that, because I don’t think so , that he [in Austin] was the main culprit. If you send him home, I think you should have sent a number of drivers home. But this is another story.”

“I don’t think either,” Miller continues, “that the minimum age will change anything. Because the majority of drivers who make these mistakes are well over 18 years old. In my opinion, this issue is not a question of age. “

“I think it’s a matter of common sense and how much respect you have for the other drivers on the track,” says Miller, giving a direct example: “Joan [Mir] and I, we have often touched this year. However, we can still look into each other’s eyes like we are doing right now. That’s racing and that’s where mistakes happen. So life is.”