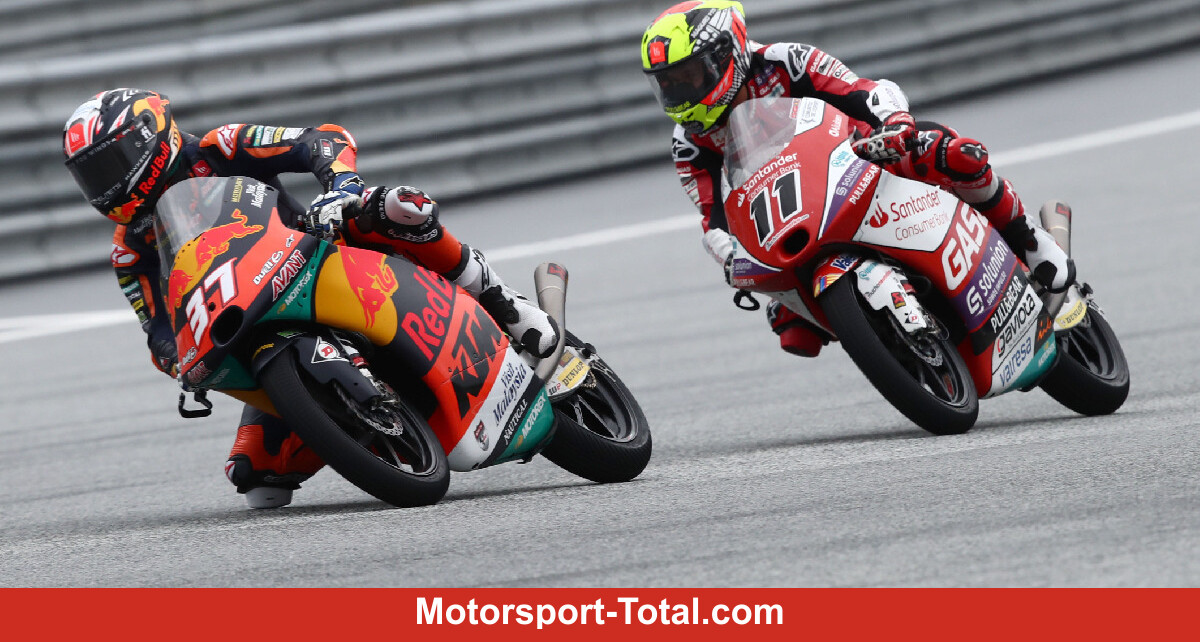 (Motorinformed.com) – Pedro Acosta (KTM) and Sergio Garcia (GasGas) fought a close and dramatic duel for victory at the Styrian Grand Prix. When Acosta attacked on the final lap, Garcia slipped and fell. Nevertheless, he drove on and made it to second place.

The race management declared it a rain race. This meant that the drivers had a free choice of tires. The sky over Spielberg was cloudy, but it hadn’t rained since the wet warm-up. The asphalt was damp, but dry spots were already forming.

Moments before the warm-up lap started, the KTM was pushed off the grid by pole-setter Deniz Öncü. He switched to slicks too late (after the 3-minute signal) and had to start from the back.

At the start of the 23-lap race, veteran Romano Fenati (Husqvarna) took the lead. Everything went well in the first corners, although it was still slippery and the tires stirred up some spray. Fenati, Garcia and Acosta pulled away from the field on the first lap.

Exciting duel between Garcia and Acosta

Kofler got off to a very good start and was seventh in the second lap. On the third lap, Acosta took the lead from Garcia for the first time at Turn 3. A lap later it turned back in the same place.

Garcia and Acosta drove away in the lead and dominated the race, with Acosta deliberately staying behind his championship chasers. After ten laps, Binder was the first driver with slicks. The South African was in 16th position, 20 seconds behind.

Eleven laps before the end of the race, Acosta made his maneuver and braked past Garcia at Turn 1, but Garcia countered at Turn 9. The duel for victory was on because the pendulum did not swing to the slicks.

Binder also received a track limit warning because he slipped off the track several times. He made up positions, but ten laps before the end of the race, the gap was 24 seconds. The slick-tyred Izdihar and Salvador were eliminated due to falls.

Dramatic final lap in the duel for victory

The duel between Garcia and Acosta continued at the top. The decision was made in the last round. Acosta braked past Garcia at Turn 1, but Garcia pushed past Garcia again at Turn 3. There was contact, Acosta was pushed outwards next to the track.

But he wasted no time. Acosta put pressure on and attacked in Turn 9. While he braked past inside, Garcia slipped and fell. But he got back on his GasGas and still crossed the finish line in second place, 14 seconds behind.

“Sergio was very strong, as always,” said Acosta. “It was a really long race. In the end, I managed to overtake him in a duel. That was a bit at the limit. But to have won here in front of the Red Bull and KTM people is great, of course. This victory is for Hugo Millan. “

And what does Garcia think of the duel? “The race was incredible – right into the last corners. There I crashed and finished second. That is still a good result for me and is good points for the World Championship. In order to win, we have to improve a few things, more Not.”

In the duel for third place, Fenati prevailed against Jaume Masia (KTM). Ayumu Sasaki (KTM) followed in fifth. In sixth place, Binder was the best driver with slicks. At the finish he was 20 seconds behind. PrüstelGP was happy about seventh place for Ryusei Yamanaka (KTM).

Kofler held sixth place in the chasing group for a long time. At the end of the fourth lap he was overtaken by Binder, whose slicks now worked better. Kofler also lost places to Yamanaka and Yuki Kunii (Honda). Nevertheless, position nine was his best result.

Carlos Tatay decided not to start the race. The Spaniard returned to Austria after a long break from injury (broken bone in his right foot). After the warm-up he felt pain in this area.

The second race on the Red Bull Ring will take place next weekend.