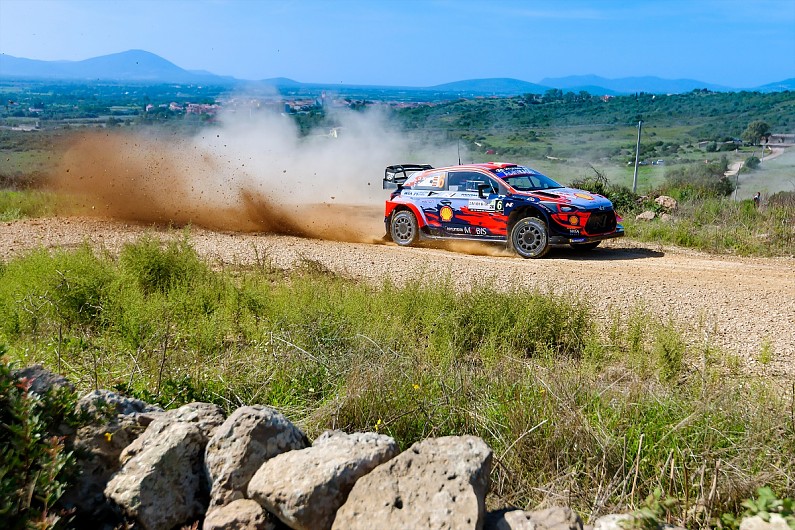 Many of the front-runners elected to take a cautious approach on the opening stage of the day, which allowed M-Sport’s Teemu Suninen to shine.

The Finn, who has previously won the WRC3 and WRC2 categories on Sardinia’s rough-hewn stages, took full advantage of the clear path that his road position granted to claim the lead by 12.4 seconds.

Sordo, as one of the three drivers rotating through the season in Hyundai’s third car, also enjoyed a favourable road position and won the second stage convincingly.

Although his team-mates Ott Tanak and Thierry Neuville are in contention for the drivers’ title, the Spaniard is focused on repeating his 2019 victory in Sardinia to help Hyundai in the manufacturers’ championship.

At the greatest disadvantage throughout the opening day was Toyota’s current championship leader Evans with the handicap of being first on the road, but the Briton still managed to power his Yaris WRC through to set the fastest time on stage three.

The morning loop ended with a second run through the same stage that had opened the rally, but this time Suninen was unable to repeat his earlier performance.

Sordo’s time afforded him a commanding 7.5 second lead as the field paused for its service halt.

Many of the mechanics and engineers had a busy time in service, not least those tending to the Hyundai of defending champion Ott Tanak.

The Estonian lost almost two minutes throughout the morning as a mystery affliction affected the front end of his i20 WRC, requiring the team to rebuild his car. 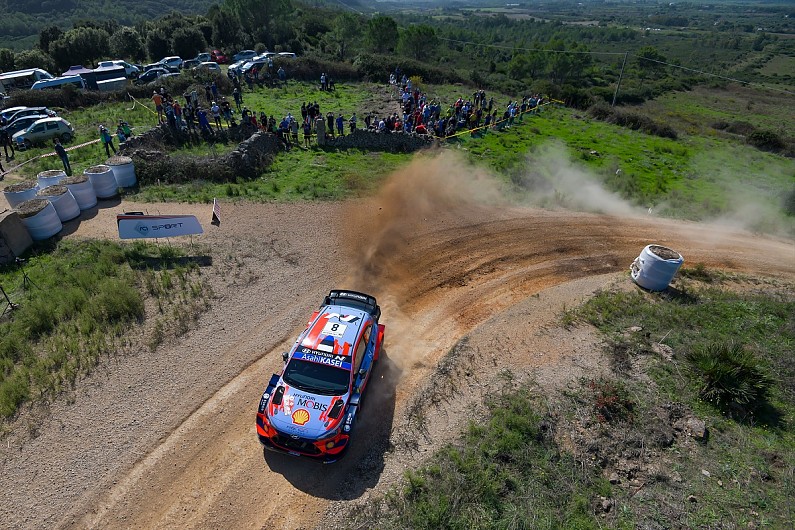 Two potential front-runners were taken out of the battle early on when Esapekka Lappi’s M-Sport Fiesta suffered engine failure on Stage 2 and the third Toyota of Takamoto Katsuta rolled on Stage 4.

Both are expected to restart on Saturday but will play no part in the lead battle.

Two more stages were run after the service halt, with Sordo winning both convincingly to extend his overall lead.

Neuville had threatened to go fastest on Stage 5 until his i20 WRC cut out in the middle of a hairpin and agonising seconds were lost before it re-fired.

Neuville’s time was still fifth fastest behind those of Sordo, the recovering Tanak, Suninen and a hugely impressive fourth fastest time for Hyundai ‘B-team’ driver, Pierre-Louis Loubet, in only his third WRC start.

On the final stage of the day, Neuville’s stalling issue reappeared but he still leapfrogged six-time champion Sebastien Ogier’s Toyota for third place.

Sordo will be forced to clear a path for the rest of the field tomorrow, with the running order changed for day 2.

Behind Sordo, Suninen, Neuvillle, Ogier and Evans came British youngster Gus Greensmith, who enjoyed what he hailed his most competitive day yet in the WRC to hold sixth overnight in his M-Sport Fiesta WRC. Greensmith stands 26.4 seconds clear of Loubet.

Toyota’s Kalle Rovanpera, another outside contender for the drivers’ title, suffered a string of mechanical issues that allowed Tanak to pass him for eighth on the final stage of the day.

Tenth place overall is held by WRC3 leader Oliver Solberg’s Skoda Fabia, with all of the top five runners in the junior category completing the day in front of WRC2 class leader Pontus Tidemand.

Alex Marquez “wants to simply accept” tough latest MotoGP outcomes
MotoGP legend Schwantz: Rossi “nonetheless has some combat left in him”
“I consider in it quite a bit” – GP Inside
MURRAY WALKER ON SENNA vs PROST
Russell: Spanish GP the very best Williams has ever felt in race-trim