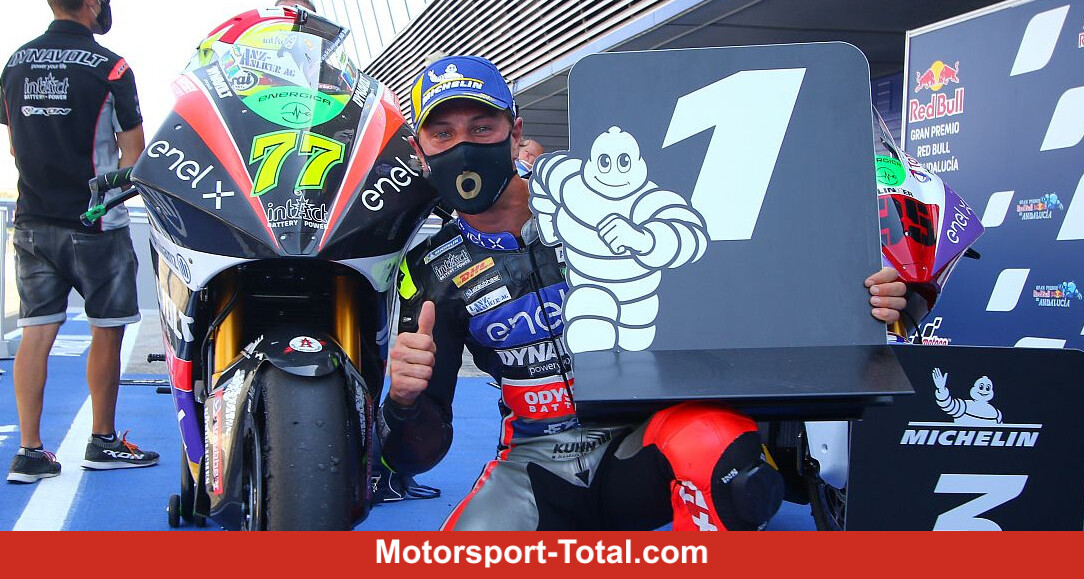 (Motorinformed.com) – MotoE rookie Dominique Aegerter secured the lead in the World Cup with victory in the second Jerez race. The Swiss took a dominant win last Sunday and is ahead of the ranking with 41 points after two events. For Lukas Tulovic, the second Jerez race did not go according to plan. An over-motivated maneuver by Eric Granado cost Tulovic the connection. He finished sixth.

Aegerter celebrated the victory: “I am overjoyed! I find it difficult to describe my feelings in words, because I never thought that I would be able to win only my second MotoE race. It is definitely a wonderful feeling to be back on top of the podium after a long time. But we have worked incredibly hard for it over the past few days. “

“We often looked at the data from the first race and tried to improve in many small details. It was a strong start to the series last weekend,” he said, looking back on third place. “But it’s very important to keep developing and making progress. So we were able to improve with every session. The conditions were exactly the same as a week ago.”

“So we were able to compare a few different set-up options. My crew always did a great job under these conditions. It is not a matter of course in this heat to stay fully concentrated from early in the morning to late in the evening for over two weeks. So thank you Boys, you were great! “, Aegerter praises the Intact crew.

Dominique Aegerter can escape the field

“Despite the short distance over six laps, the race was incredibly exhausting. The fight in the first two laps was very tight and tough. But I knew that I had the pace to be able to pull away from the front. So I have everything in order to get out of the dust as quickly as possible, otherwise it would have been a hot potato. Finally, I managed to pull away a bit and bring my first victory home safely “, reports Aegerter, who is 2.7 seconds ahead Jordi Torres had.

“After this brutally long stay here in Jerez in this heat, I’m initially looking forward to a short break at home in Switzerland. On the other hand, it’s a bit of a shame that we have a longer break until the next race. In such a strong one As a racing driver, you naturally want to continue in the form we are in, “said the Swiss.

“But I’m already looking forward to Misano. I absolutely love the track there. We have three races at Misano. So that can only be good for us, because unlike some other drivers, the track is new to us. The Opponents will start the weekend with a small advantage, “notes Aegerter.

“But we’ll work all the harder to make up for this disadvantage as quickly as possible. We want to be in the top group again in every session,” explains the former Moto2 race winner. “Hopefully by then all the drivers who were hurt here in Jerez will be healthy and fit again.”

Lukas Tulovic is pushed out and loses connection

Lukas Tulovic also started from row one in the second Jerez race. “Unfortunately, the race went a little below my expectations. It wasn’t me, though,” he regrets. “On the first lap I was pushed far out at the end of the back straight. I don’t know what Eric Granado was up to there, but in any case he was much too late on the brakes. He himself also had to go a long way.”

“In any case, I happily lost five or six places because of this action. As a result, it was impossible to move forward because of the short distance. To have a first lap like this is of course a disaster,” said Tulovic angrily. “On the other hand, I’m happy with my pace. When I found my rhythm, I was able to set some really fast lap times that were faster than my qualifying time.”

“That’s why I managed to catch up at least a few positions. But it’s a real shame because I had the speed to fight for a top 3 position in the end,” commented the German. “Ultimately, however, this sixth place is okay. We have collected good points for the cup standings and I have learned a lot for the next races.”

What Lukas Tulovic still wants to work on

“Mainly I’ve improved when it comes to maintaining the pace even when the tires are deteriorating. But I still have to work on myself so that I can stay more focused in the race. Apart from that, we still need a little more grip Finding the rear wheel, “he says of the tasks for the rest of the season.

In the drivers’ standings, Tulovic is in fifth position after two races. “The result is okay for the overall standings, but I would have preferred if I had been able to fight for the podium without this incident. But now I’m looking forward to returning home after almost five weeks of southern heat. where the temperatures will hopefully be more pleasant, “said the Tech 3 pilot.