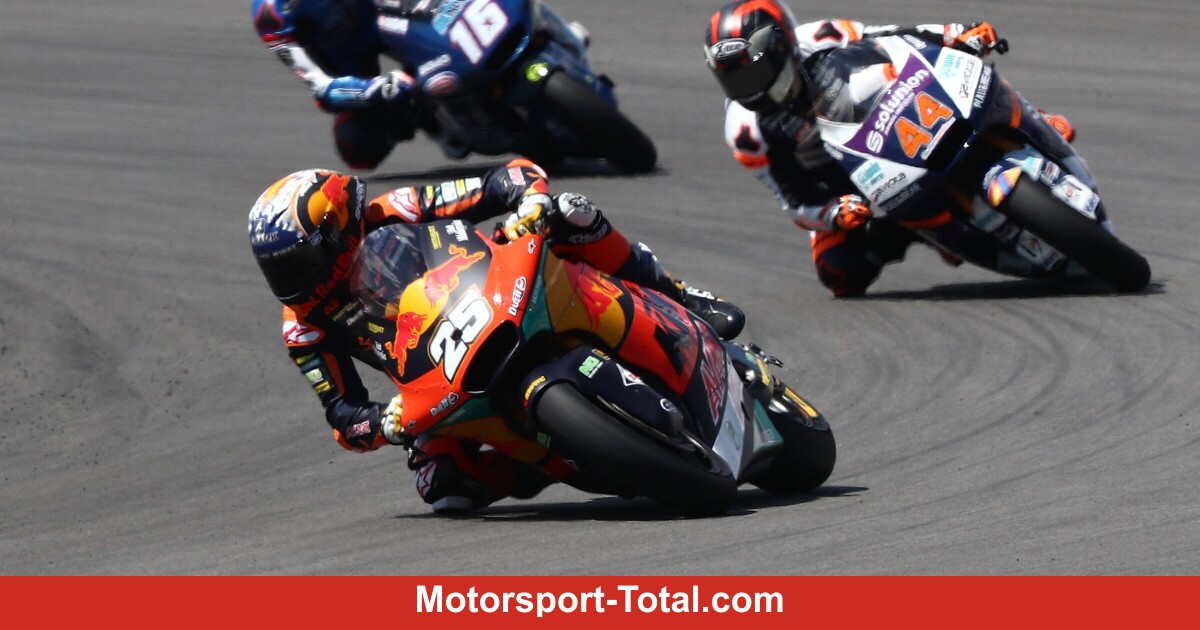 (Motorinformed.com) – Moto2 super rookie Raul Fernandez continues to leave a lasting impression: In his only third race in the middle category in Portimao, the Ajo-KTM driver clinches his first victory. Fernandez prevailed in the end against Aron Canet, Joe Roberts and teammate Remy Gardner. The previous World Championship leader Sam Lowes retired at the start after a spectacular highsider.

“Unbelievable! I have no words. Thanks to my team, because they provided me with the best motorcycle. In qualifying, I was unlucky with the yellow flag. In the warm-up I said to myself that I had the best motorcycle. In Qatar I didn’t have much left of the tires in the end. Now everything was fine. I’m looking forward to Jerez, this is one of my best tracks, “said Fernandez afterwards in the Parc ferme.

Portimao was also worth a trip for Marcel Schrötter. The only German firm starter in the motorcycle world championship benefited from a lightning start and incidents before him. From position 19 on the grid, Schrötter finished his race to catch up in ninth place. Tom Lüthi, however, was 17th without a counter.

At the start, Bezzecchi took the holeshot, but Gardner took the lead in the first corner. Behind this, however, there was a drama: After contact with Gardner, Sam Lowes got off his motorcycle spectacularly via highsider and was out of the race.

Behind Gardner and Bezzecchi, Xavi Vierge finished the first round in third, ahead of Joe Roberts, Augusto Fernandez and Raul Fernandez. This group of six set themselves apart from the rest of the field. Marcel Schrötter worked his way up to P13 in the starting phase, Tom Lüthi fought for a place in the top 20.

Bezzecchi took the lead again in lap 4, while the top 6 got a visit from the pursuers again. There were repeated changes of position in the first racing quarter. Bezzecchi benefited from this as the leader and was more than a second ahead of Roberts, Gardner, Aron Canet, Raul and Augusto Fernandez for the first time after five laps.

Gardner saw the signs of the times and took second place from Roberts. Two dramatic accidents occurred further back: Yari Montella and Stefano Manzi crashed in the target corner, both bikes caught fire in the gravel bed. Ai Ogura and Somkiat Chantra’s two Idemitsu bikes knocked each other out on Turn 5 after touching Cameron Beaubier.

After a third of the race distance, Bezzecchi’s lead over his pursuers Gardner, Canet, Raul Fernandez and Roberts shrank to less than a second. At this point Schrötter was already in the top 10 in ninth place, Lüthi was listed as 17th.

Gardner lost second place to Canet on lap 9 and lost another position to Roberts a little later after a mistake. Up front, Canet had completely closed the gap to Bezzecchi again. After the Italian slid, Canet took the lead on lap 10.

Roberts vs. Canet duels in the middle of the race

The big beneficiary of their duel is Roberts, who took over the lead in lap 11 and subsequently swapped places with Canet over and over again. Ultimately, the American prevailed. As a result of the fighting, a group of seven emerged again at the front.

On lap 12, Celestino Vietti and Nicolo Bulega found themselves in the gravel bed after a collision at turn 1. The two fighters were only able to calm down with difficulty, and there was almost another fight like that between John McPhee and Jeremy Alcoba in Qatar.

After the many duels against the middle of the race, things calmed down a bit at the front. Roberts, Canet, Gardner, Bezzecchi, Vierge, Raul and Augusto Fernandez watched each other in the battle for the top. However, Gardner built in the next mistakes on lap 16, which cost him third place.

At the beginning of the last third of the race, Roberts and Canet had a small cushion of 0.7 seconds on Bezzecchi and Raul Fernandez, followed by Gardner, Augusto Fernandez and Vierge.

Raul Fernandez with the greatest reserves

With six laps to go, Canet Roberts conceded in Turn 5, so the Spaniard was leading the race. Behind them, Raul Fernandez took third place from Bezzecchi and immediately closed the gap to the top duo. A little later Fernandez also passed Roberts. At this point Schrötter was in tenth place, Lüthi in P17.

Roberts rode an attack on Turn 11, but ultimately didn’t prevail. In the final sector, the American also had to cede third place to Gardner. The order at the finish was: Raul Fernandez, Canet, Gardner, Roberts, Augusto Fernandez, Bezzecchi, Vierge. Hector Garzo, Cameron Beaubier and Marcel Schrötter complete the top 10.