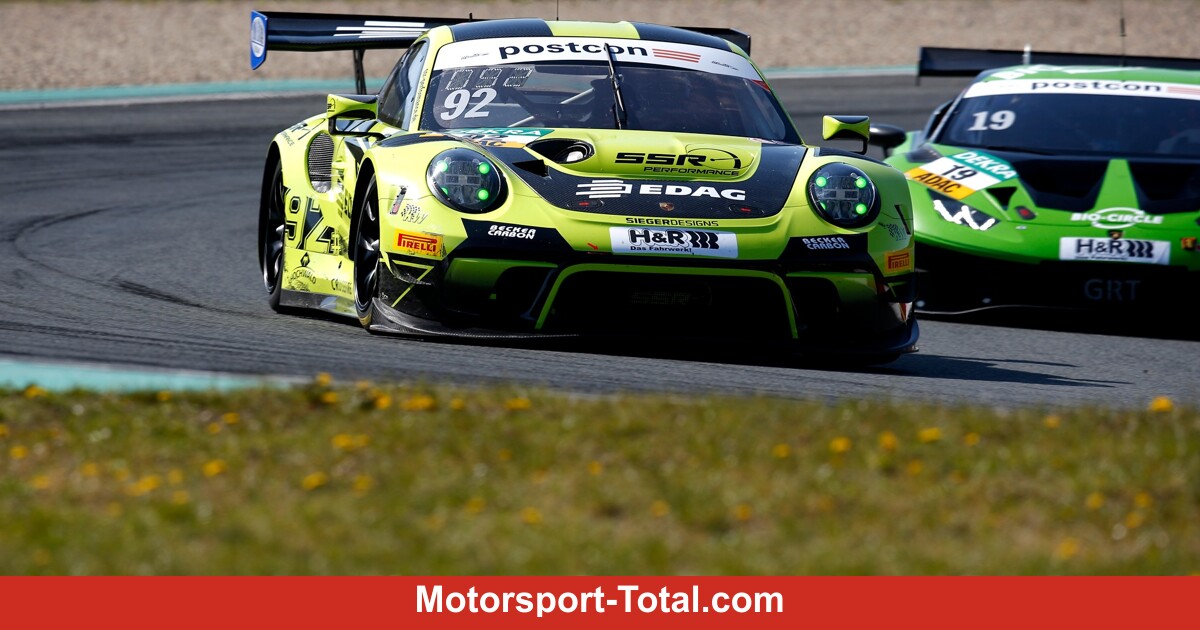 (Motorinformed.com) – Sensational news for the DTM: On the coming race weekend at the Nürburgring, according to information from ‘Motorinformed.com’, a Porsche will be at the start for the first time in the history of the traditional series! With SSR Performance, the reigning championship team from the ADAC GT Masters is behind the effort and will ensure a guest start with the Porsche 911 GT3 R.

The SSR-Porsche will celebrate its DTM premiere next weekend
zoom

The 35-year-old Michael Ammermüller from Passau will be behind the wheel. Last year he won the title in the ADAC series for SSR Performance and is currently leading the championship together with Porsche works driver and teammate Mathieu Jaminet.

For Ammermüller, this is a dream come true: The Lower Bavarian had good chances of winning a DTM contract with HWA over ten years ago, but then lost out to Ralf Schumacher. He then got his career back on track via the Porsche Supercup, in which he won the title three times.

Will SSR Performance complete the entire DTM season in 2022?

At Porsche, they have recently been less than enthusiastic about their involvement in the DTM, as their sporting home is more likely to be in the SRO series or the ADAC GT Masters. That is one of the reasons why the guest start came about at such short notice and details had to be clarified until the very end.

At SSR Performance, there is great interest in the DTM, in contrast to Porsche: The team of Managing Director Stefan Schlund, whose initials appear in the team name (Stefan Schlund Racing), and ex-Porsche Development Director Wolfgang Hatz, who acts there as team boss, is financial excellently positioned.

After the title in the first season in the ADAC GT Masters, the young but very professional squad is reaching for bigger goals, especially since there are good chances of defending the title this season.

The media presence of the DTM makes it particularly attractive for the team supported by Manthey. Background: Manthey also takes care of the factory operations of the legendary sports car manufacturer.

Team owner Schlund visits the DTM at the Lausitzring

Team owner Schlund was already at the DTM on the Lausitzring weekend at the end of July and, according to information from ‘Motorinformed.com’, was very impressed by the traditional series. That is why it is also important to be involved in the entire 2022 season – but with the new 911 GT3 R, which is currently being developed.

Up until a few days ago there were signs that the race would not take place at the Nürburgring after all. Because the AVL Balance-of-Performance classification, which was communicated to the teams, does not provide for any serious changes. The current GT3 car with its small rear engine has less power than the other GT3 cars in the DTM, which is why the classification of all vehicles must be based on the Porsche.

The fact that this new classification with smaller restrictors or less boost pressure had not been communicated to the teams a few days ago shows that the DTM made every effort to ensure that nothing leaks out.

23 vehicles on the Nürburgring

But will SSR Performance’s Nürburgring outing remain the only DTM outing of a Porsche for the entire season? That is not said. Because even the season finale at the Norisring could – if it can take place despite the coronavirus crisis – as an absolute DTM classic for SSR Performance, represent an attractive stage.

The fact that the SSR-Porsche drives at the Nürburgring means that the DTM regular field has grown from 19 vehicles to 23 bolides, since the JP-McLaren is making its second guest appearance with Christian Klien. In addition, this time two additional Mercedes-AMG cars are at the start: the Toksport WRT team is using Luca Stolz, while the HRT team is bringing an additional third Mercedes-AMG GT3 to the start for team owner Hubert Haupt’s DTM comeback.

The fact that Porsche is competing in the DTM was already an issue before the season. Nevertheless, teams like Speed ​​Monkeys also failed because the current 911 GT3 R is sold out and hardly any vehicles are available on the market.

The Rowe team, which won the 24 Hours of Spa-Francorchamps with the racing car last year, was also an issue, but in the end they opted for the BMW M6 GT3, because in the camp of the Munich team they also made their way through the DTM history of the Bavarian brand promises better prospects.

Verstappen-Hamilton collision: “Tactical fault” or “racing incident”?
Marquez couldn’t do something towards Bagnaia: “I attempted all the pieces”
Quartararo sad with “actually bizarre” functioning tire
MotoGP factors chief Quartararo “can’t perceive” lacking moist feeling
“I am undecided what to say”