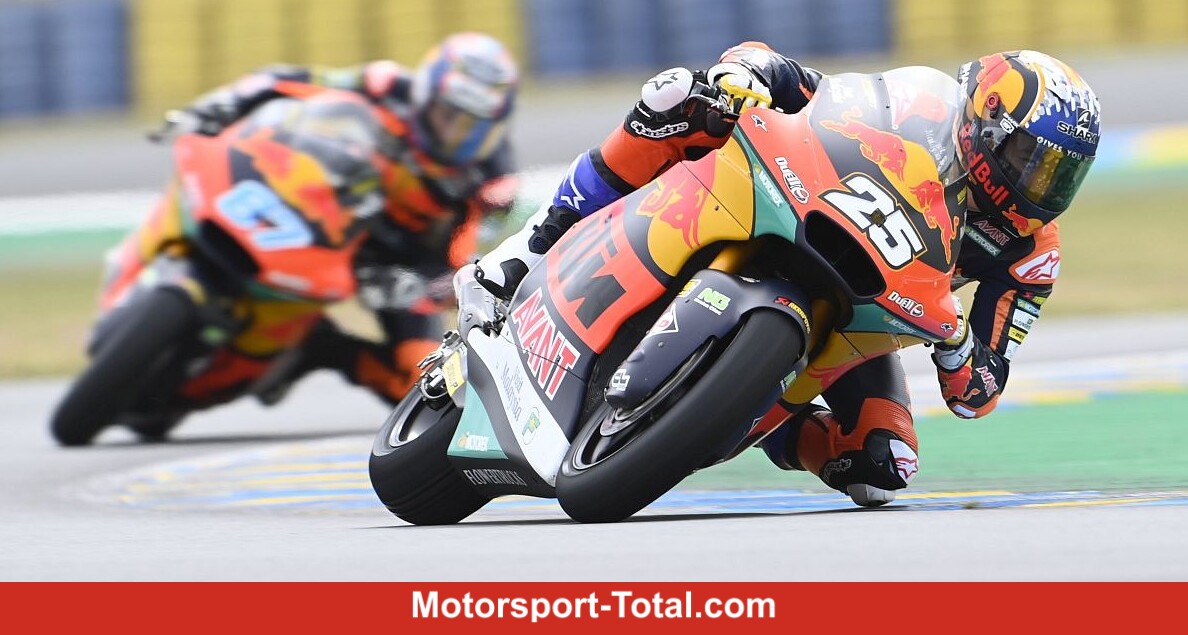 (Motorinformed.com) – Double success for Aki Ajo’s Moto2 team: Raul Fernandez drove to Portimao for his second win of the season at Le Mans and relegated team-mate Remy Gardner to second place. Marco Bezzecchi made it to the podium again this time in third place after his second place in Jerez. Marcel Schrötter came in sixth.

After the Moto3 race had been declared a rain race, but the track dried up noticeably during the course of the race, the Grand Prix of the middle world championship class was issued as a dry race. Everyone was on slicks, but had to be even more careful about some of the still wet spots.

Bezzecchi decided the start for himself, pole setter Raul Fernandez kept the connection in second. Aron Canet fell in third place in Turn 9 on the first lap and was out of the race. Sam Lowes was tenth after one lap.

Several early falls in the lead

His team-mate Augusto Fernandez fell on the second lap, shortly afterwards Stefano Manzi also went down. Finding the limit was difficult in the conditions. In the next laps, Lowes and Xavi Vierge, who collided at Turn 8, as well as Joe Roberts, were eliminated from the chasing group.

The latter was in second place when he almost crashed Bezzecchi in the rear. But the Italian was lucky, but a few corners later he lost his lead to Raul Fernandez, who was able to build up a lead at the front.

After the first ten laps the field had sorted itself out a bit: Raul Fernandez made the pace in front, one second behind were Bezzecchi, Bo Bendsneyder, Gardner and Tony Arbolino. Schrötter was in sixth place, but was already seven seconds behind his team-mate Arbolino.

Jerez winner Fabio Di Giannantonio was ranked eleventh after a long lap penalty for a maneuver against Hector Garzo. However, he had to take a second long lap penalty because the first one was not executed correctly. With that, the Gresini driver lost further positions and fell back to the bottom of the points.

Halfway through the 25 laps of the race, the track on the ideal line was as good as dry. The top 5 drove a deep 1:37 times. Cameron Beaubier was already 14 seconds behind in sixth place. Schrötter lost places and was only ninth.

In the chasing group behind the top duo, Bendsneyder lost two positions to Arbolino and Gardner, who quickly closed the gap to Bezzecchi and was finally able to fight his way past on lap 19. Thus Gardner took second place and hunted down teammate Raul Fernandez at the top.

At the beginning of the last five laps, the two were separated by a second and a half. Bezzecchi, Arbolino and Bendsneyder followed some distance behind. Beaubier was eliminated in sixth place with a fall. His bike skidded over the track at turn 3, but the other riders were able to avoid it.

In the final phase, nothing changed in the order of the top 5. Raul Fernandez kept the lead over Gardner constant and crossed the finish line 1.490 seconds ahead of his teammate, who made it a perfect one-two for Ajo Motorsport.

“In such conditions, I just always tell the drivers that it is important to finish the race,” admits team boss Aki Ajo. “Well, what can I say? You did it really well again.”

Moto2 at Le Mans: The voices of the top 3

Race winner Fernandez admits: “To be honest, I don’t like conditions like that very much. But it was the same for everyone. Many thanks to my team for being calmed down on the grid. Of course I’m happy with the result. That is my second win in my first season. “

After starting from seventh on the grid and a difficult early phase, Gardner was happy with second place: I was stopped and almost got pulled off the bike by another rider. I was then in eleventh place and had to catch up. Since it was second place in the end, I can’t complain. “

Bezzecchi, for whom victory was out of reach early on, took third place with mixed feelings. “I expected a little more from this race,” said the Italian. “My bike was quite restless and I received a track limit warning. From that point of view, the result is still okay.”

Schrötter sixth, but behind Arbolino

Behind Bezzecchi, Moto2 rookie Arbolino and Bendsneyder achieved their best results of the season, finishing fourth and fifth. This also applies to Schrötter, who in the end just managed to come out on top in sixth in a large group of pursuers.

Only 21 drivers saw the checkered flag. One of those who fell was Tom Lüthi, who was eliminated after 14 laps. Gardner was able to maintain his lead in the World Cup, but is only one point ahead of Raul Fernandez. Bezzecchi holds third place overall.

McLaren comfortable to attend over Audi F1 future choice
Marquez’s plan to be on the Sepang check – GP Inside
New rule when restarting the sprint race for more safety
Loris Baz confirmed the worth of the MotoAmerica championship – GP Inside
For Ezpeleta, Petrucci’s profitable Dakar exhibits the extent of MotoGP