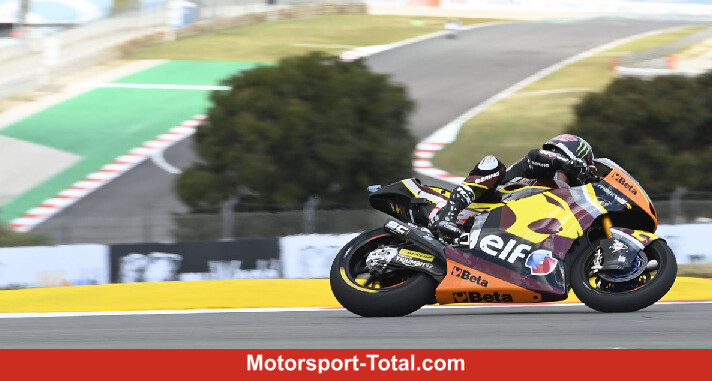 (Motorinformed.com) – Moto2 World Championship leader Sam Lowes starts from pole at the Portugal Grand Prix in Portimao. The Briton almost set the fastest time in qualifying (on the result). For Marcel Schrötter, Saturday afternoon did not go according to plan. After Schrötter slipped out of the top 14 in FT3 on Saturday morning, he had to compete in Q1. But there was the end of the line for the German.

Sam Lowes is the favorite in the first European race
zoom

Q1 in Portimao started with a bad crash. Jorge Navarro (Boscoscuro) said goodbye in the early stages of Q1 with a violent departure from qualifying. The Spaniard was shaken vigorously, but was able to leave the scene of the accident after a short break on his own.

Marcel Schrötter’s (Kalex) working day ended prematurely after Q1. The German failed because of a top 4 finish that was necessary for promotion to Q2 and only ended Q1 in fifth position.

Schrötter was 0.019 seconds short of saving fourth place. This means that Schrötter is only in 15th position on Sunday. Intact team-mate Tony Arbolino also missed the jump into Q2, as did Tom Lüthi (Kalex).

Fall and pole for Sam Lowes

In Q2, World Championship leader Sam Lowes set the fastest time and thus pole. In the final attempt, the Brit fell in turn 11, but was uninjured. The fall had no effect on the result, because with a lap of 1: 42.901, Lowes had already presented enough.

After Q2, Lowes explained how the crash came about: “The course was pretty difficult yesterday. The lap times were slower. Today we were about as fast as last year. It’s because of the rubber that is on the racing line. When I crashed and the falls in MotoGP showed that there was definitely no rubber next to the ideal line. “

“It was a small mistake. In the race or in a normal training session I would have given up the curve. But you try it in qualifying. It didn’t cost any self-confidence. I was just a bit far,” said Lowes confidently.

In Qatar Lowes was able to win both races. The former MotoGP rider is also the big favorite in Portimao. “The bike felt good. We were able to improve it a lot over the weekend. It was much more stable today. At the same time, we didn’t lose any grip. That is always important. Usually you solve a problem and create a new one. But we have good worked “, explains the Marc VDS pilot.

Ajo driver Remy Gardner was only 0.023 seconds slower than Sam Lowes in Q2. Gardner is on the front row on Sunday, just like Xavi Vierge, who got into the final round via Q1.

“I consider in it quite a bit” – GP Inside
Tooned 50: The making of (part 2)
MotoGP French GP to be proven dwell on ITV4
MotoGP legend Schwantz: Rossi “nonetheless has some combat left in him”
Honda’s “Marquez-dependence” in figures – GP Inside