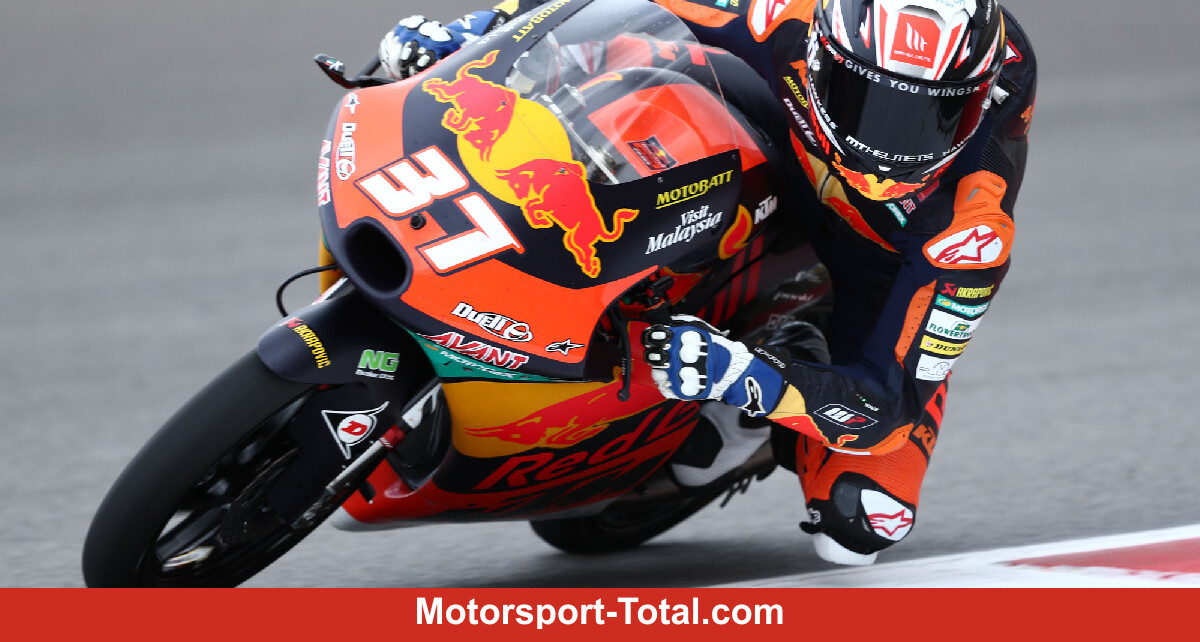 (Motorinformed.com) – With Pedro Acosta there is a new super talent in the motorcycle world championship. After finishing second in Qatar and winning in Doha, the KTM rider also triumphed at the Portuguese Grand Prix. After three races, the Spaniard leads the Moto3 class by 31 championship points (for the championship standings).

“The weekend was not easy with the changing conditions,” says the 16-year-old at the finish. “Before the start, I asked one of my mechanics what the strategy for the race was like. He said: have fun for 25 minutes and then take the trophy with you. That worked out well!”

Acosta is the first rider since Daijiro Kato to stand on the podium in his first three Grands Prix. Kato managed that in 1996, 1997 and 1998 in his wildcard starts in the 250cc class in Suzuka. Acosta is the youngest rider to have three podiums in a row.

As always, a turbulent Moto3 race

Darryn Binder (Honda), Jeremy Alcoba (Honda), Deniz Öncü (KTM) and John McPhee (Honda) had to start from the pit lane due to penalties. They rushed after the field. As usual, a large group with countless overtaking maneuvers formed at the front.

There was intense fighting in the field for 21 laps. Especially on the long home straight, the drivers fanned out in the slipstream and there were many changes of position. So nobody could get away. On the third lap there was a first accident among the leaders.

Before Turn 3, Gabriel Rodrigo (Honda) braked and drove Xavier Artigas (Honda) to the rear wheel. Artigas had no chance and went down. Rodrigo received a long lap penalty for this.

On lap eight, Kaito Toba (KTM) crashed into Niccolo Antonelli’s (KTM) side at turn 3 and crashed. Izan Guevara (GasGas) could not avoid it and went down as well. Antonelli remained seated after the bump and drove on.

By halfway through the race, a top ten group had formed. Then the next accident happened in turn 3. Adrian Fernandez (Husqvarna) and Tatsuki Suzuki (Honda) clashed and tumbled into the gravel. Fernandez had driven Suzuki to the rear wheel (look up all the action in the ticker!).

At the top, Foggia and Acosta fought a close duel for the lead. Andrea Migno (Honda) also got involved. The decision was made in the final phase. Foggia started the last lap just ahead of Acosta and Jaume Masia (KTM) in the lead.

But then Masia crashed into turn 5. So the duel for the victory was Foggia against Acosta. At Turn 13, Acosta overtook Foggia and was ahead. Acosta had a slide in the target curve. Foggia tried to overtake in the slipstream, but Acosta was 0.051 seconds ahead at the finish line (on the race result).

“It was a long race because I was at the front on my own for so long,” commented Foggia. “In the end Pedro was a bit stronger than me. But I’m still happy to have started my personal title fight with a good result.”

Migno was third on the podium. The other places in the top 10 went to Ayumu Sasaki (KTM), Rodrigo, Antonelli, Romano Fenati (Husqvarna), Sergio Garcia, Masia and Ryusei Yamanaka (KTM).

The Swiss Jason Dupasquier, the second PrüstelGP driver, also collected championship points in twelfth place. The Austrian Maximilian Kofler (KTM) was unable to set any accents in Portimao. As 21st he came away empty-handed.

The next Grand Prix will take place on May 2nd in Jerez (Spain).