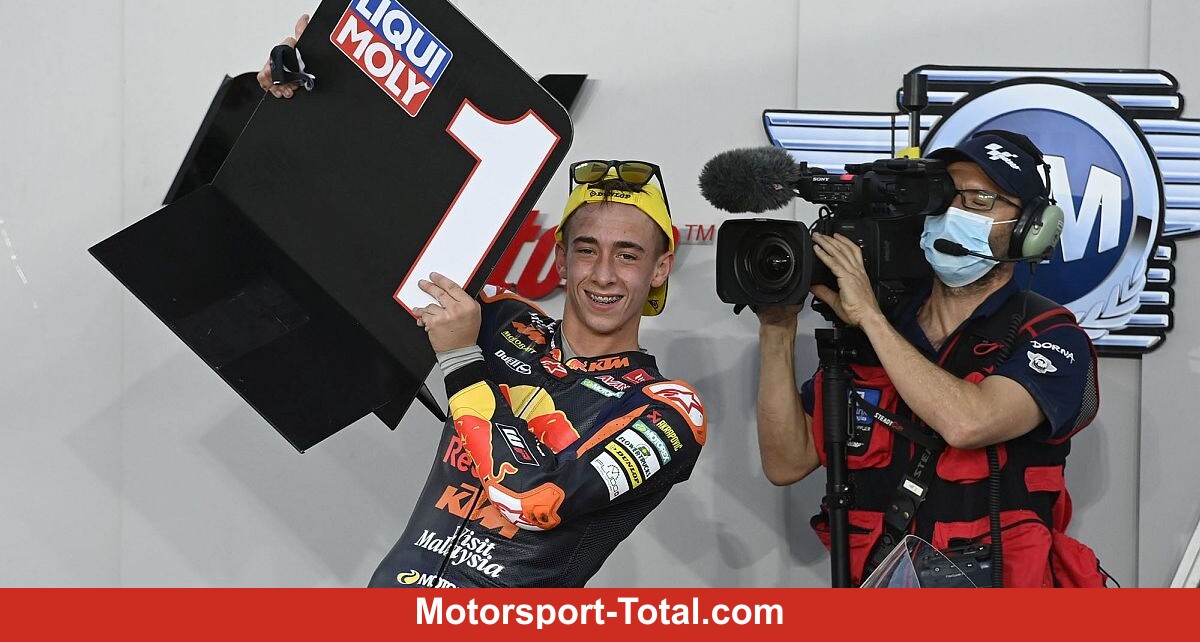 (Motorinformed.com) – Pedro Acosta hit the motorcycle world championship like a bomb. In his first Moto3 race in Qatar, he immediately finished second on the podium. This was followed by a race to catch up for the history books in the second race on the Losail course.

Pedro Acosta has taken the Moto3 class by storm
zoom

Acosta had to start from the pit lane after a penalty and still won the race. The rookie win number two of the season followed in Portimao. After three races, the newcomer to the World Championship leads the Moto3 overall standings by 31 points.

The fact that a 16-year-old has such successes in his first three races on his World Cup debut is unique. For comparison, Marc Marquez managed a third place (in his sixth race) in his entire first 125cc season (2008).

Also in his second season, a third place was his best result. Marquez took his first win in his third year in 2010, when he also became the 125cc world champion. In his first 125cc season (1996), Valentino Rossi finished third in the tenth race on the podium for the first time.

The Italian then achieved the first and only victory of his rookie season in the eleventh race. And a Jorge Lorenzo only made it onto the podium for the first time with a win in Rio (2003) towards the end of his second 125cc season.

In comparison, Acosta dwarfed these multiple world champions in the first three grands prix. “His approach and his impact in Moto3 is unbelievable,” said Rossi only with praise. “He’s also very strong in duels.”

Marquez: “If he continues like this, it will be difficult for everyone”

That’s why Rossi comes to the conclusion: “Pedro is a great, great talent. He is very strong!” Spain has the next super talent in the pipeline. In Aki Ajo’s team, supported by KTM and Red Bull, the path to MotoGP is mapped out. The environment is ideal.

“Pedro Acosta is good, very good,” praised Marquez. “I tweeted about him after the Qatar races. He drives differently. I think he’ll win this year, but you shouldn’t put any pressure on this boy. He’s still very young.”

In Portimao, too, Pedro Acosta drove the right maneuvers to victory Zoom

“But if he keeps a cool head he’ll make it into MotoGP and do very well there. He’ll be another Spaniard in the premier class. If he continues that development, then I have no problem saying he’s done it for.” will make everyone very difficult. “

Acosta has only contested three World Championship Moto3 races, and yet he is already being traded as the new superstar. As the rider who could dominate and shape the MotoGP era after Marquez in the future. There is still a long way to go before then.

Aki Ajo is one of the best team bosses in the paddock who can optimally look after young talents and accompany their development. In 2010, Marquez made the decisive breakthrough in the Finn’s team. At that time it was the initial spark for the great successes in all classes.

“It’s always difficult to compare drivers,” says Ajo. “There are a lot of talented drivers and everyone has their own style, their own style. We also try to learn from each driver. It doesn’t matter whether he is 16 or 30 years old.”

“What I liked about Pedro is his old-school style. That reminds me a little of the other Australians, Jack Miller and Remy Gardner. It’s not normal in the younger generation. If he uses it well, it could be a strength when you work like in the old days. “

The coming weeks and months will show how Acosta deals with the fact that there is a lot of hype about his person from one day to the next. “That’s always the question,” says Ajo. “It’s not easy for a young driver when everyone is suddenly talking about you.”

Acosta hype is a first test

“But that’s a test. It’s not just a test, it’s a learning process. I don’t expect everything will always go perfectly. I even hope that sometimes it’s not perfect, because you can learn from mistakes and difficult moments.” laughs the Finn.

“And we always have to get better and better. If everything goes well, then I think we’re not complete. So it’s normal for these moments to exist. I don’t think Pedro would let that bother him, though. “

Will Pedro Acosta shape the MotoGP era after Marc Marquez in the future? zoom

“He’s a fun boy with a good attitude. From what I’ve seen after his first win, he didn’t keep checking Instagram or the news. He even swapped the SIM card on his phone. So I think he did was very well prepared. “

Last year Acosta competed in the CEV Moto3 Junior World Championship, which he finished third. At the same time, he also competed in the Red Bull Rookies Cup. Acosta dominated this and won the championship title.

The Ajo racing team has been an integral part of the small classes since 2002. Mike di Meglio was 125cc World Champion in 2008 and Marquez in 2010. Sandro Cortese won the World Championship title in 2012, the first Moto3 year. Brad Binder followed in 2016. With Johann Zarco, Ajo became Moto2 world champion twice.