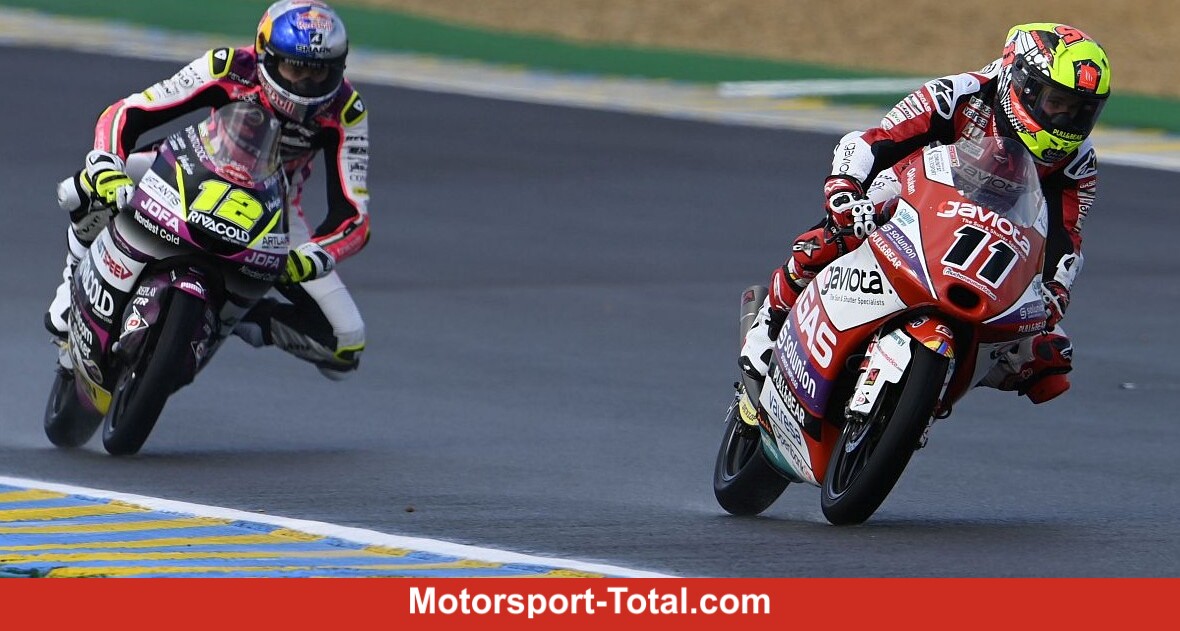 (Motorinformed.com) – Sergio Garcia celebrated the second victory of his Moto3 career at Le Mans. The GasGas driver prevailed in a tumultuous race on a drying track against Filip Salac (Honda), for whom it was the first podium place like for third-placed Riccardo Rossi (KTM). World Cup leader Pedro Acosta finished eighth.

The first incident occurred before the start of the race. Carlos Tatay fell victim to the cold and damp conditions and crashed on the starting grid on the way. He had to go back to the pits with his KTM and started from the back.

Pole setter Andrea Migno initially stayed ahead at the start, but braked himself in Turn 3 and fell back. Niccolo Antonelli took the lead in the course of the first lap, but fell in the target corner and had to retire. Shortly afterwards, Tatsuki Suzuki and Jeremy Alcoba also went down independently of each other.

Salac and Garcia out of reach early

At the top, Salac dueled Garcia for the lead. Rossi held third place. Jaume Masia was fourth, but he also threw away his chances of a podium at the end of the second lap. Just a few corners later, Masia’s team-mate and sensational rookie Acosta also got hit.

He had already fought his way into the top 10 from 21st place on the grid, but then slipped in Turn 3. The Spaniard resumed the race, but was only in 20th position.

Up front, Garcia and Salac quickly separated from the rest of the field. After five of 22 races, both were already five seconds ahead. Rossi stayed in third place, followed by Ayumu Sasaki and John McPhee. Migno was at the bottom of the top 10.

Acosta catches up quickly after a fall

Acosta was scratching the points again after his fall. He benefited from further incidents, as Gabriel Rodrigo and Kaito Toba also fell.

As the sun came out, more and more dry spots appeared on the asphalt. Garcia experienced some dangerous slides at the front, but was able to hold on to the bike and even increased the pace again. The first 1:55 time of the race fell on lap 9. His pursuer Salac had to be demolished.

At the same time, Darryn Binder fell in sixth place. Adrian Fernandez took the lead in the second chasing group, who was already 15 seconds behind McPhee in fifth place. Acosta fought its way past Maximilian Kofler and was still in the top 10 with ten laps.

Garcia under pressure, but only for a short time

The battle for the lead came to a head between Garcia and Salac. The latter was able to catch up again and benefited from a mistake Garcia made in turn eight to get past him. But Salac’s lead didn’t last long, Garcia overtook him and built up another lead.

In the final phase, the pace got faster again as the conditions continued to improve. McPhee in particular picked up speed, overtook Sasaki and took long strides towards Rossi in third place. But the KTM rider was able to save last place with a lead of one second.

At the front, Garcia drove towards a sovereign victory. In the end, Salac had nothing more to oppose and crossed the finish line two seconds behind in second.

Moto3 at Le Mans: The voices of the top 3

“That was a really difficult race because the track conditions were different from lap to lap,” admits the race winner. “I still tried to go to the limit. This victory is for my team and for my father.”

Salac celebrated his first podium: “I’ve been waiting for this day. Today my dream came true! The race was very long, but I’m very happy with this result. Many thanks to everyone who made it possible.”

Rossi was ecstatic too: “I’m so happy! All the efforts of my family and my team have finally paid off. Thank you very, very much!”

McPhee missed the podium in fourth, but collected the first championship points after four clear rounds. As in Jerez, Sasaki crossed the finish line in fifth place. Fernandez and Xavier Artigas came in sixth and seventh. Acosta finished eighth after a fall and a race to catch up – ahead of Deniz Öncü and Romano Fenati.

Migno, PrüstelGP teammates Ryusei Yamanaka and Jason Dupasquier as well as Izan Guevara and Andi Farid Izdihar secured the final points. The Austrian Kofler fell back to 16th place in the end.

In the World Cup, Acosta extended its lead to 54 points. Garcia is new second thanks to his win. Migno and Fenati follow a little behind in third and fourth place.