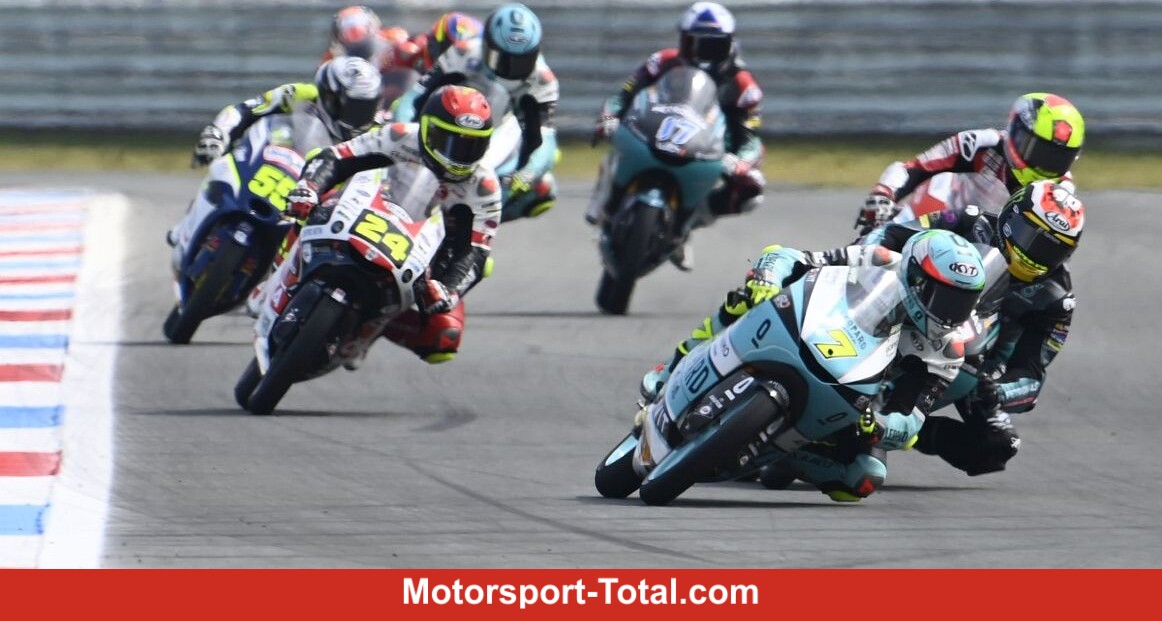 (Motorinformed.com) – Honda driver Dennis Foggia celebrates his second victory of this Moto3 season in Assen. In the end, the Italian won over 22 laps in a close battle against Sergio Garcia (GasGas) and Romano Fenati (Husqvarna), who finished on the podium despite two long lap penalties. World Cup leader Pedro Acosta finished fourth.

Even before the start of the race, some drivers saw signs of a difficult race: Jaume Masia, Lorenzo Fellon, Takuma Matsuyama, Joel Kelso, Yuki Kunii and Andi Farid Izdihar were given a drive-through penalty for strolling around in qualifying.

Ricciardo Rossi had to start from the pit lane because he had participated in a track activity in Assen for the past 14 days. This is forbidden according to the regulations. Romano Fenati and Adrian Fernandez had already received a double long lap penalty after the last Grand Prix in Germany.

That’s why Fenati’s lead didn’t last long after the start. He completed his first long lap after two laps, while six drivers started their drive-through penalties. Foggia and Garcia then fought for the lead at the front, while World Cup leader Acosta gradually fought his way forward.

He hadn’t been able to contest yesterday’s qualifying after a serious fall in Friday’s third practice session, but was given the go-ahead for race Sunday and worked his way up from 18th place early on. After just five rounds, he was in the top 10.

Fenati also made rapid progress despite his second long lap and was already fighting back in the top group after nine laps. This decimated only one lap later as a result of a collision between Andrea Migno and Niccolo Antonelli, who both fell. Antonelli was able to continue the race, however.

In the second half of the race, a leading group of seven drivers was able to break away further and further. With the beginning of the last five laps it got restless in the top field. The leadership alternated Foggia, Fenati and Garcia back and forth. Darryn Binder, Pedroa Acosta, Tatsuki Suzuki and John McPhee also fought.

In the last lap, however, the pursuers lost contact with the top 3. Foggia was able to defend its lead against Garcia and Fenati and thus secured its second win of the season after Mugello. At the finish, the top 3 separated only two tenths.

Moto3 in Assen: The voices of the top 3 drivers

“It was an incredibly difficult race. Congratulations to Fenati on making it onto the podium after two long lap penalties. He wasn’t the only one with a long lap penalty. There were a few drivers and then I am full to win. Those are important points for me, “said Foggia of his victory.

Runner-up Garcia sums it up with satisfaction: “The race was a lot of fun. I think it was the fastest race of the year. I fully attacked right into the last lap and I’m very happy about second place.”

And Fenati is also more than happy in view of the starting position: “It’s amazing to have finished on the podium here. After all, I had to do the long lap twice. In the race I got along well and only had a few problems with the rear tire towards the end . In general, the bike was really strong today. “

Binder finished fourth, but was downgraded three positions due to a track limit violation, so that Acosta, Suzuki and McPhee moved up to fourth to sixth and Binder was classified seventh. Gabriel Rodrigo, Xavier Artigas and Jeremy Alcoba completed the top 10.