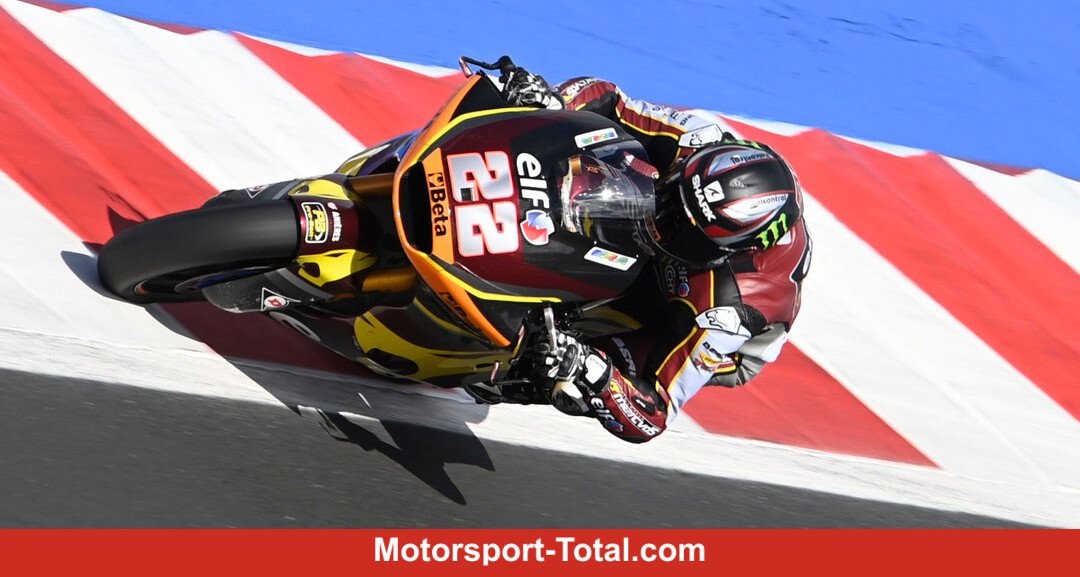 After it had rained repeatedly over the past few days, the race took place over 25 laps in consistently sunny and dry conditions. Lowes was on pole and shared the front row of the grid with Jorge Navarro and Augusto Fernandez.

A long lap penalty was imposed on the latter before the start of the race because of slow driving in Q2. Simone Corsi and Jake Dixon received the same punishment, but for a different offense: they were overthrown when the flag was yellow.

Compact group in the early stages

At the start, Lowes held his own at the front, but lost the lead to Canet during the first lap. Another Boscoscuro driver, Jorge Navarro, followed in third place. Marcel Schrötter was able to make up some ground from starting position 22 and moved into position 19 after the first lap.

Augusto Fernandez fell back from fourth ten positions after his long lap. His namesake Raul Fernandez took fourth place, while World Championship leader Remy Gardner was stuck in tenth place. However, he was still part of the extended management group, because the field initially remained close together.

After a few laps, Lowes lost another position to Navarro, who then dueled with his brand colleague Canet for the lead. Lowes, who slipped through and was thus in front again, could benefit from this.

Gardner kicks Chantra out of the running

The Brit took the opportunity and immediately increased the pace. After five laps he was seven tenths of a second ahead. But behind that, Raul Fernandez was preparing to close the gap again. He had taken second place from Canet and was now the first pursuer of the leader Lowes.

Further back, Gardner fought doggedly for positions, clearing Somkiat Chantra in the process. The race management immediately announced an investigation. Meanwhile, Augusto Fernandez increased the pressure on Gardner on the track. After his long lap he was eighth and stuck Gardner on the stern.

At the front, Lowes lost his lead after a near fall in Turn 14, so that Raul Fernandez caught up. Canet held third place, behind him Navarro already had to let go. Celestino Vietti, wearing a bright yellow special paint job in honor of Valentino Rossi, finished fifth.

Raul Fernandez falls while in the lead

Augusto Fernandez drove the best pace at halftime. Past Gardner, he settled Stefano Manzi into sixth place. At the same time, Raul Fernandez took the lead from Lowes for the first time, but lost it with a violent take-off.

On the brakes at Turn 8, the rookie suddenly flipped the front wheel away and Fernandez was only a passenger. He and his bike rolled over in the gravel. Fortunately, Fernandez was unharmed while the Kalex was badly damaged. In the fight for the title, however, the fall was of course a major setback.

Because the zero increased the gap to world championship leader Gardner again. He was given a long lap penalty for the collision with Chantra, but was able to maintain his position despite the penalty and initially remained seventh. However, Marco Bezzecchi pushed him into eighth place only moments later.

At the front, Lowes dueled Canet for the lead, while Augusto Fernandez kept pushing forward. Past Navarro and Vietti, he chased the top duo in third place and actually got close enough to Canet to overtake him on the home straight in the battle for second place.

In the end, the two were separated by just 0.167 seconds. Race winner Lowes was more than a second ahead. This ended a long dry spell for the Briton, as it was the first triumph since the one-two in Qatar at the beginning of the season.

“It wasn’t easy for anyone this weekend to find the perfect setting. I had never driven more than eight laps in a row with the soft tires. That’s why I struggled a bit at the end,” said Lowes at Parc Ferme. “But I tried to manage the tires and everything else.”

“Congratulations also to Augusto, who finished second with the hard tire and a long lap penalty. These are strong points for the team”, the Briton also praised his team-mate, who himself spoke of an “unbelievable race”.

“I knew since yesterday that I had a penalty, but I had calculated a lot anyway. Why not? I just kept believing in it. The race was really fun. It can go on like this,” said Fernandez, happily Canet caught in the last few meters.

He mused: “It was a strong race, but I don’t know what happened on the last lap. All of a sudden I had no more propulsion and had no chance of finishing second. Congratulations to Augusto for the strong race and also to Lowes. After all, it’s another podium for me. “

Light and shadow at VR46 in the home race

Vietti missed the podium, but celebrated his best result of the season with fourth place. His VR46 teammate Bezzecchi threw away a top 10 result three laps before the end of the race when he crashed at Turn 15. Gardner inherited seventh place. He lined up behind Navarro and Manzi. His lead in the World Cup is 18 points.

Fabio DiGiannantonio, Ai Ogura and Marcos Ramirez completed the top 10 in places eight to ten. The remaining points went to Albert Arenas, Bo Bendsneyder, Jake Dixon, Tom Lüthi and Marcel Schrötter, who collected a point as 15th. A total of 20 drivers saw the checkered flag in the race.