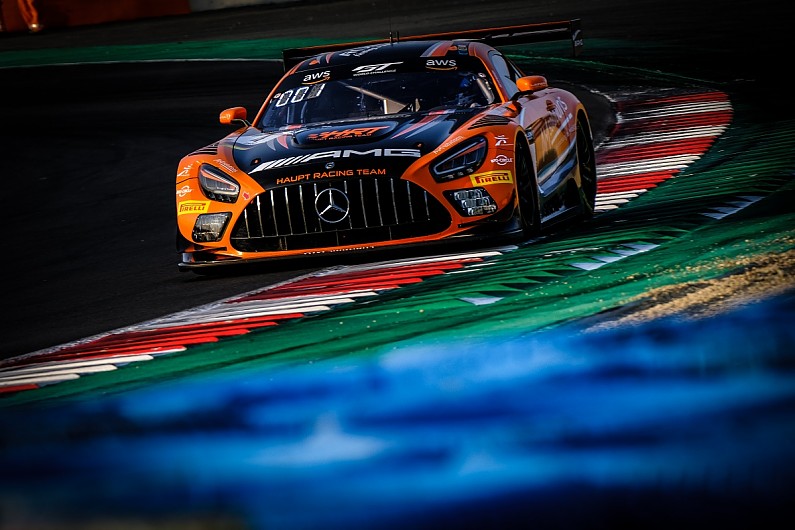 Haupt Racing Team’s Maro Engel and Luca Stolz closed on the lead of the GT World Challenge Europe standings with victory and a third in the Sprint Cup at Magny-Cours.

The Mercedes pair, who were narrowly beaten to both the overall and sprint titles last season, claimed a routine win in race one, with race two spoils going the way of Sainteloc Audi’s Simon Gachet and Steven Palette.

Second in the Sprint Cup standings coming into the weekend, Engel and Stolz started the first race on Saturday evening from pole position and proved the car to beat throughout the one-hour affair.

Stolz started the race and made quick his escape as the chasing field squabbled with each other.

Aside from the Emil Frey Lamborghini of Mikael Grenier in second, Stolz was able to ease clear in the lead thanks to the Madpanda Mercedes of Ezequiel Perez Companc holding up a train of six cars in third.

Sprint Cup points leader Charles Weerts made sure he was in the mix come the flag after a forceful overtake on the Attempto Audi of Tommaso Mosca at Lycee.

Weerts then barged his way past Perez Companc, forcing the Argentinian through the gravel at Grande Courbe and dropping the Merc down the order.

Louis Machiels brought out the full course yellow after he spun his Pro-Am AF Corse Ferrari at Estoril, which bunched up the pack.

Stolz proved the superior pace of the HRT Mercedes by immediately gapping Grenier at the restart, while Weerts came under pressure from Mosca.

The order remained largely the same either side of the pit window, with Norbert Siedler – taking over from Grenier – having to defend heartily from Dries Vanthoor who had switched with Weerts in the Team WRT Audi.

Vanthoor was by far the quicker driver in the remaining 25 minutes but could not find a way past the nimble Lamborghini.

Siedler had to fend off no fewer than six Audis behind him but did so superbly to secure the first Lamborghini podium of the GT World Challenge season.

Vanthoor ultimately finished less than half a second behind Siedler but spent too long fending off another Audi in the shape of Frederic Vervisch in the battle for the final place on the podium.

Christopher Haase and Arthur Rougier claimed fifth for Sainteloc but only after an epic battle with a charging Kelvin van der Linde in the WRT Audi.

Van der Linde had a ding-dong fight with Mattia Drudi’s Attempto R8, going side-by-side at Lycee and then into Grande Courbe with van der Linde coming out on top.

The South African then fought a similar battle with Haase in the closing stages but could not usurp the German.

Sunday’s second race was no less dramatic as polesitters Palette and Gachet made up for their race one disappointment – when they finished 13th – with a largely routine victory.

Gachet opened a margin over the AKKA ASP Mercedes of Raffaele Marciello before the pit window but lost the lead after the mandatory stops to Marciello’s team-mate Timur Boguslavskiy.

Boguslavskiy looked to have secured the crucial advantage after the stops but threw away the lead with an understeer moment at Estoril.

This gave Palette and Gachet the victory they deserved following a superb opening stint, while Stolz and Engel secured yet more valuable points with third.