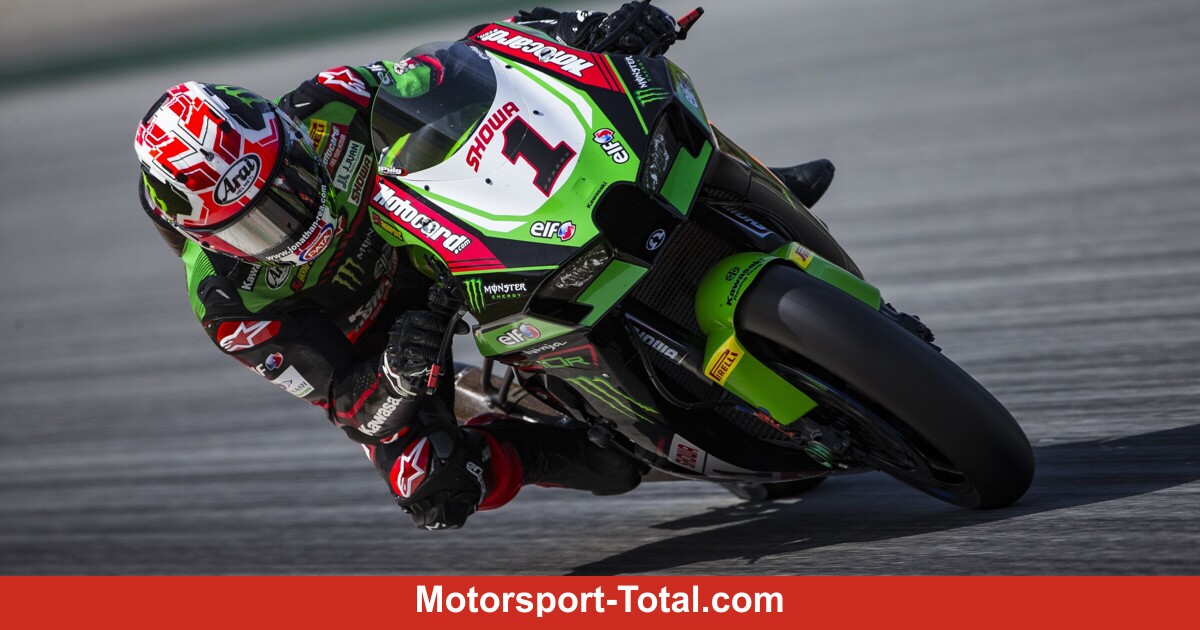 (Motorinformed.com) – The weather played a major role in the test drives over the past few days. Two private test days were reserved in MotorLand Aragon (Spain) on Wednesday and Thursday. Kawasaki and the Yamaha World Superbike teams were there.

Since it was still wet on Wednesday morning, the drivers did not leave until the afternoon. Thursday was completely rainy, which is why the teams packed up ahead of time. A maximum of ten test days are allowed for each rider in the Superbike World Championship.

The driving time on Wednesday afternoon is deducted from this quota as half a day. Kawasaki was on the road for the first time in Aragon with the new Ninja ZX-10RR. Jonathan Rea and Alex Lowes were in the saddle.

Only Andrea Locatelli was on site in the Yamaha factory team. Garrett Gerloff and Kohta Nozane (both GRT-Yamaha) as well as Christophe Ponsson (Alstare-Yamaha) used this test opportunity. Two MotoGP teams were also in Aragon with their test riders.

That was Yamaha with Cal Crutchlow and KTM with Dani Pedrosa. The best lap times were recorded on a dry track on Wednesday afternoon. Superbike world champion Rea set the fastest time of the day with 1: 49.338 minutes.

With this mark, Rea was also a tenth of a second faster than Crutchlow with the MotoGP-Yamaha. Lowes followed in third and Pedrosa with the MotoGP-KTM in fourth. Of course, you should never overestimate unofficial test times in private tests.

Positive conclusion from Rea and Lowes

“This test was very positive,” concludes Rea. “Although the track was still a bit ‘green’, we were able to confirm many things that we tested in Barcelona. The track is different, but there are also similarities. So the comparisons were positive.”

Kawasaki mainly focused on the chassis for half the day. “We were really able to start putting the package together,” says Rea. “I could feel my rhythm getting better from lap to lap. I drove a lot with race set-up.”

“When we saw that the second day of testing [Donnerstag] would be wet, we tackled a time attack at the end of the day. “That explains Rea’s best time with a soft qualifying tire and little fuel in the tank.

Team-mate Lowes turned 73 laps on Wednesday. “My shoulder felt a lot better than it did in the Barcelona Tests,” said Lowes. He also worked on the electronics for corner exit and chassis settings. “I’ve never felt so good on the ninja.”

Kawasaki will next test in Aragon on May 4th and 5th. Then the Yamaha works team will also be in action with both riders. Toprak Razgatlioglu’s preparation for the season was hindered at the beginning of April due to a positive corona test.

After his quarantine in Barcelona, ​​Razgatlioglu traveled to Turkey. So Locatelli was on his own in this test in the Yamaha factory team. On Wednesday, the reigning Supersport world champion turned 59 laps and set a personal best of 1: 51.550 minutes.

“The responsibility was on Lokatelli’s shoulders,” says his crew chief Andrew Pitt, “to put the final pieces of the 2021 package together. We worked off all things from Yamaha’s list and got feedback for Pirelli. From that point of view, it was very productive, even if we were didn’t have the chance to concentrate on the race pace. “

Why the FIA ​​didn’t take away the contested vibrators at Le Castellet
“Quartararo is able to coping with our issues” – GP Inside
Russell: F1 efficiency secondary to Williams’ survival below previous possession
Rossi eyes transfer to GT3 racing after MotoGP retirement
Miguel Oliveira, journey to second pole (and past)?