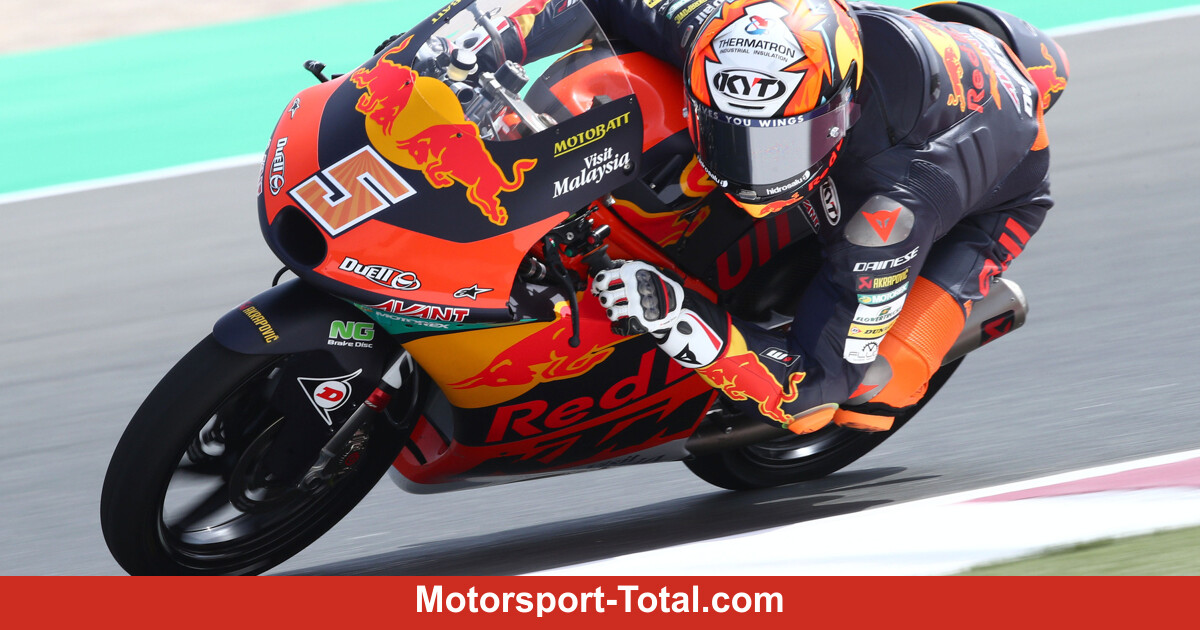 (Motorinformed.com) – After the MotoGP teams had been testing for five days at the Losail International Circuit in the past two weeks to prepare for the new season, the small classes were on the road for three days this week.

Jaume Masia: Switched from Leopard-Honda to Ajo-KTM and straight away in the test
zoom

In the Moto3 test, the three best times of the day on Friday, Saturday and Sunday went to Darryn Binder (Petronas-Honda), John McPhee (Petronas-Honda) and Jaume Masia (Ajo-KTM). Masia’s time of 2: 04.263 minutes in the last session on the final day was the fastest of the entire test. The Spaniard drove a Honda for the Leopard team last season. Now he set the best test time straight away when he made his debut in Aki Ajo’s KTM team. (Photos: Moto3 test in Losail)

“I am very satisfied with the work we have done here over the days,” said Masia, who told MotoGP.com: “Although we were not in the top 5 at the beginning, we didn’t worry And finally found a really good set-up. It went really well in strong winds, and even when it wasn’t so windy I got along quite well. Now I’m ready for next week’s race. “

Pedro Acosta as a rookie directly on P2

Masia’s new team-mate Pedro Acosta finished in the combined timesheet of all three days with 0.306 seconds behind P2. The young Spaniard, who became champion in the Rookies Cup last year, was the fastest of a total of six rookies in the starting field for the Moto3 World Championship in 2021.

Masia’s team-mate Pedroa Acosta: With P2 the fastest rookie in the Zoom test

The two Petronas Honda drivers McPhee and Binder finished the test after their best times on Saturday and Friday, respectively, on P6 and P10. Binder, who is sitting on a Honda for the first time, had a fall on Saturday in addition to the fastest lap of the day.

In Jorge Martinez’s Aspar team, the KTM bikes used this year are called GasGas. Izan Guevara as one of this year’s rookies, and team mate Sergio Garcia, for whom at least the Aspar team is also new, drove the machines branded as GasGas in the test on P4 and P15.

In addition to Acosta and Guevara, Adrian Fernandez, the younger brother of this year’s Moto2 rookie Raul Fernandez, is driving his first season in the Moto3 World Championship. He drives for Max Biaggi’s Max Racing Team, which is pursuing a marketing strategy with the Husqvarna brand that is very similar to that of Aspar with GasGas. The young Fernandez finished the test in P27 and was thus the last in the ranks of the lined up pilots, while his experienced team-mate Romano Fenati lined up in P8.

The Austrian Maximilian Kofler, who is going into his second season for Green Power, placed 23rd in the field of 27 pilots for whom a time was noted. Tatsuki Suzuki, who has won a race in each of the past two years, was the only one who did not take part in driving. For the Japanese in the service of the SIC58 team, a positive coronavirus test result was noted, which is why he had to sit out.

Where does BMW stand in the WSBK season 2021?
Ducati, what a begin! Can you actually dream massive now?
MotoGP French GP to be proven dwell on ITV4
Zarco optimistic for Le Mans with the “greatest” bike on the grid
Tooned 50: The making of (part 2)