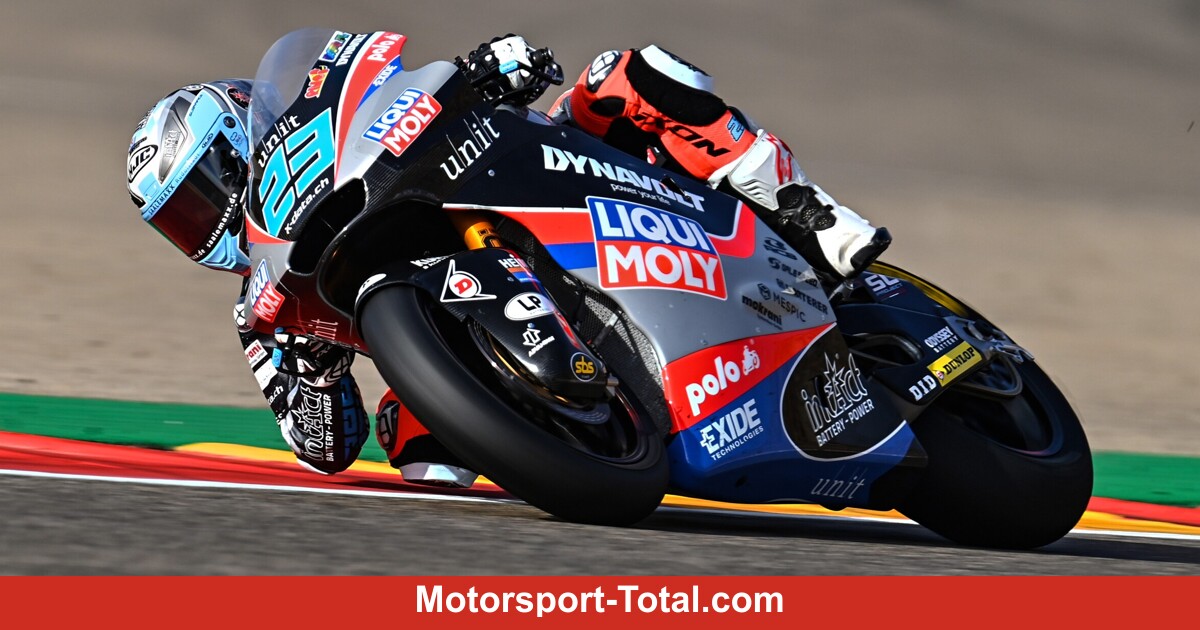 (Motorinformed.com) – Marcel Schrötter experienced a turbulent Moto2 race in MotorLand Aragon (Spain), which ultimately ended in disappointment. The German crossed the finish line in tenth, but received a 3-second penalty for exceeding the track limits too often. So he was rated eleventh.

Marcel Schrötter was upset after the Aragon race
zoom

A close duel between Ai Ogura and Schrötter for seventh place was decisive for the race. He gritted his teeth on the Japanese. “In the last third I was able to close the gap of a good three seconds towards Ogura and also created a cushion for myself in the process.”

“When it was my turn, I wanted to prepare it for myself. But I was on the brakes at the absolute limit in almost every corner,” says Schrötter. “I was often in a situation where the front was about to smear away. Ogura, on the other hand, had better reserves in this area.”

“It was therefore incredibly difficult to find a place where I could safely overtake him. So it started a strenuous and at the same time annoying game of overtaking each other, because he often found a way to hit back immediately or simply to counter.”

“When I was a few meters in front of him, the front wheel of the corkscrew collapsed. At that moment I thought, okay, that was it. But somehow I managed to catch a fall and I think I could mine Just keep my position. “

“A little later, Ogura caught me again. Shortly before the end, I overtook him at a point where I was faster than him on every lap. There I immediately closed the line completely.”

“Nonetheless, it immediately stabbed in a place where there was actually no more space. At that moment I almost burst into anger because I had the pace and it was also my plan to catch up with di Giannantonio.”

Lingg: “He should have been more forceful”

“But because we fought so stupidly, the shot actually backfired. In the next moment the people from behind were there who were more than two seconds behind. I couldn’t look that fast until I was caught by the first driver have been. “

That was Fermin Aldeguer. In the last round there was a duel with IntactGP team-mate Tony Arbolino. “When I wanted to really get going on the last lap, Tony was suddenly next to me and pushed me onto the grass verge.”

“That may have been the negative climax of the frustrating outcome,” says Schrötter annoyed. “It wasn’t a really great race what we showed.” If he had got past Ogura then a top 6 result would have been possible.

“Maybe he should have acted more energetically and not hesitated for so long,” notes team boss Jürgen Lingg. “Because then he would have passed immediately and would not have been involved in the tumult any more. With the lap times he set, he could easily have set himself apart.”

“It is extremely unfortunate that we could not bring home a possible sixth place,” says Schrötter. “It hurts a lot, actually I puke. But we have no choice but to take the positive with us, even if the disappointment with the end result predominates.”

“The 12 months of my life by which I’ve progressed essentially the most”
Loeb will now not have Elena as a rally co-driver
McLaren F1 driver Norris to maneuver to Monaco from UK
Ducati: Bagnaia “takes one other step” in MotoGP when he “reaches his degree”
Ramón Forcada separated from Franco Morbidelli however understanding