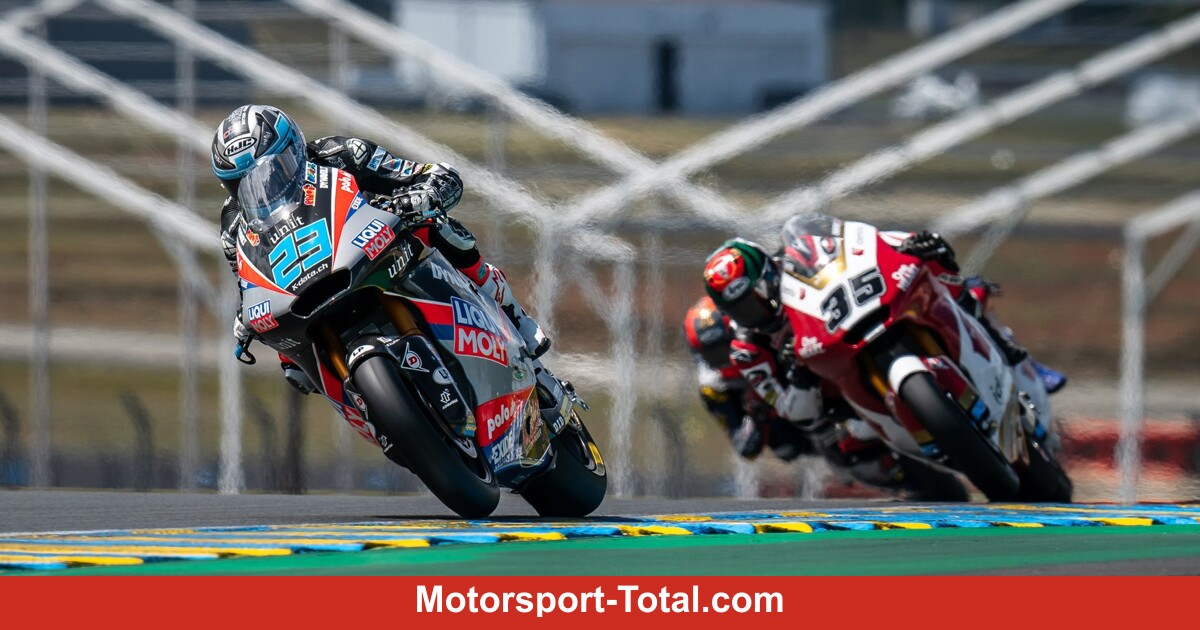 (Motorinformed.com) – Fourth and sixth place for IntactGP in Le Mans: The German Moto2 team achieved the best result of the still young season at the French Grand Prix with Marcel Schrötter and rookie Tony Arbolino. Above all, Arbolino, who started the race from 19 on the grid, made a lasting impression.

Marcel Schrötter was sixth in one of the chasing groups
zoom

“Tony was outstanding. He sometimes drove times that were better than the front runners and he fought confidently for third place. That was actually the biggest surprise for me, even if I knew he was fast,” admits Team manager Jürgen Lingg. And Arbolino himself was surprised by himself.

“It was a crazy race and I couldn’t believe it when I crossed the finish line and saw the checkered flag in fourth place. I was just super happy,” said the Moto2 rookie. “I was really happy about our work, the confidence in myself and the fact that we are no longer missing too much.”

Although the race started as a ‘dry race’, Arbolino says: “I felt like it was raining lightly at the start of the race and the drivers were much more careful, so I thought this was my time to push. I was happy to keep the pace and be able to set fast lap times throughout the race. “

After just two laps, the Italian was in the top 10 and had also left team-mate Schrötter behind. “I’m not completely happy, even if we weren’t unlucky today,” admits the German. “We benefited from the many failures in front of us, on the other hand I managed to stay seated.”

“I am disappointed that I was too slow. We had competitive pace all weekend and we were in the areas of 1.36: 8 and 1.37: 2 – like everyone else.” In the race, however, the group in which team-mate Arbolino was also missing was almost a second.

“That’s astonishing,” puzzles Schrötter about his pace. “My rear tire deteriorated enormously towards the end, which wasn’t the case in practice sessions. Strangely, right from the start, I felt as if I didn’t have the same weapons as before, which the time difference to the group in front of me also proves. “

“I still tried to make the best of it, fought in my group and managed to keep the lead within my group despite a destroyed rear tire. That was the maximum,” the experienced Moto2 rider sums up almost 28 seconds were missing from the top.

Team manager Lingg thinks: “Marcel drove a strong race, although he was a bit too conservative at the beginning. Unfortunately, the lead was gone by then, although I don’t think he could have kept up today. He led the chasing group again and kept in check, that makes me proud. “

IntactGP hopes to continue the upward trend in the future: “Fourth and sixth places are great results for our team, we can build on that. Still, we have a lot of work ahead of us because it won’t be easier, but these races give us all additional motivation and gives us confidence. “

M-Sport reveals a colourful Ford Puma for the 2022 WRC
Battle at the Bull Ring: IMSA Returns to Lime Rock
FIA investigation into Abu Dhabi should give clear solutions
MotoGP, Vinales and Espargarò in Noale: breefing on the Aprilia RS-GP22
Alonso: Oldest driver tag now provides me a bonus in F1