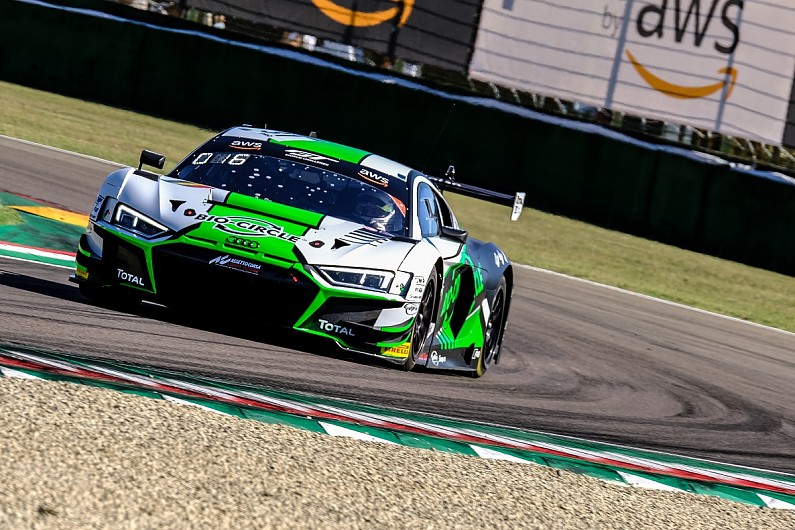 Audi claimed victory in the opening GT World Challenge Europe Endurance Cup round of the season at Imola courtesy of its Team WRT squad.

In the hands of Matthieu Vaxiviere, Kelvin van der Linde and Mirko Bortolotti, the #31 Audi R8 took the lead in the second hour after a sensational stint from van der Linde.

In total, there were five full course yellow periods – three of which occurred inside the opening hour – which contributed to a stop-start race, but the Audi remained the class of the field, beating the #12 GPX Racing Porsche of Mathieu Jaminet, Matt Campbell and Patrick Pilet by just over three seconds.

Saturday’s qualifying had been a tight affair with the Attempto Racing Audi of Mattia Drudi, Frederic Vervisch and Kim-Luis Schramm claiming pole from the AF Corse Ferrari of James Calado, Alessandro Pier-Guidi and Niklas Nielsen.

Vervisch took the start in the #66 Audi and led from Calado’s Ferrari while 2019 runner-up Maro Engel’s Porsche 911 GT3-R was forced through the gravel at Tamburello following contact with Campbell.

Christian Hook caused the first FCY after losing control of his AKKA ASP Mercedes GT3 exiting Rivazza (below), while contact between the CMR Bentley Continental GT3 of Petru Razvan Umbrarescu and Remos Vos’ Ram Racing Mercedes brought out the second.

Barely a lap was completed following that restart before the yellows were out again; the Imperiale Racing Lamborghini Huracan GT3 of Giovanni Venturini having lost a wheel after contact.

Vervisch and team-mate Schramm then lost time and several places with a slow stop during this FCY, leaving the #71 Ferrari now with Nielsen at the helm, in the lead.

Van der Linde, now in the seat of the WRT Audi, was fifth at the restart but made quick work of those in front of him.

His highly impressive stint was then completed after a switch-back manoeuvre on Nielsen at Tamburello to take the lead, which he then extended by some 16 seconds before handing over to Bortolotti.

Each time, Bortolotti maintained his lead and duly took the win by 3.428 seconds from Jaminet, with Felipe Fraga, Boguslavskiy and Raffaele Marciello completing the podium.

There was a silver lining for the Italian brand though, as Frederik Schandorff, Patrick Kujala and Alex MacDowall claimed Silver Cup honours following a late-race incident for the Garage 59 Aston Martin Vantage of Valentin Hasse-Clot.