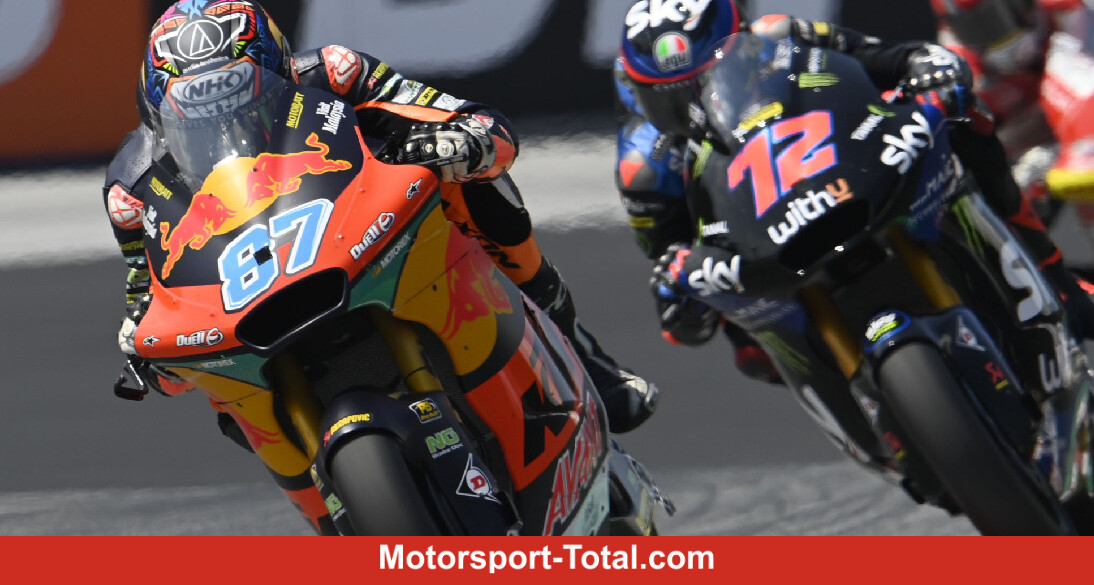 (Motorinformed.com) – Australian Remy Gardner took his fourth Moto2 victory of the 2021 season at the British Grand Prix. Gardner prevailed in a close duel against Marco Bezzecchi at Silverstone. Jorge Navarro was third on the podium. Tom Lüthi and Marcel Schrötter collected world championship points outside of the top 10 (on the result).

Since Raul Fernandez dropped out due to a fall, Gardner increased his championship lead to 44 points (for the championship standings). “Of course, if you win, it’s a good day,” enthused Gardner. “I knew that Marco had the soft tire and was therefore patient. The last time I overtook him, I managed to build up a small lead. This is my first win with fans on the track. I don’t even know What I should say.”

At the start of the 18-lap race, Bezzecchi won the holeshot, but Sam Lowes took the lead in the first few corners. After the first round the order was: Lowes, Bezzecchi, Navarro, Raul Fernandez and Gardner.

In contrast to Moto3 and MotoGP, no rider was able to break away from the front. But Gardner pointed, overtook driver after driver and took the lead in the first third of the race. Bezzecchi held against it and a duel with several overtaking maneuvers developed.

On lap 6 there was even a slight contact between the two at turn 15, but both were able to continue. Behind them, Lowes, Fabio di Giannantonio and Navarro caught up. Raul Fernandez already lost touch with the leading group in sixth place.

The duel between Bezzecchi and Gardner raged on. Again and again the leadership changed between the two. As a result, Lowes in particular was able to keep up. Seven laps before the end of the race, the drivers picked up the pace.

Raul Fernandez is eliminated due to a fall

Gardner grabbed the lead again, but Bezzecchi kept up. Behind them, Navarro turned up and reduced the gap to third-placed Lowes. In the end there were two duels: Gardner against Bezzecchi for the win and Lowes against Navarro for third place (look up all the action in the ticker).

With four laps to go, Raul Fernandez crashed into Turn 13. He was lying in the meadow with pain, his Kalex was lying on the edge of the track. But the all-clear came right away. The World Cup runner-up was able to get up and leave the scene on his own.

Gardner started the penultimate lap half a second ahead of Bezzecchi. The Italian came back to the Australian’s rear wheel for the final lap, but Gardner didn’t give him a chance to attack.

Marco Bezzecchi had to overcome many problems

Thus Gardner celebrated his fourth win of the season and extended his World Championship lead over Raul Fernandez to 44 points. In third place in the World Championship, Bezzecchi is 52 points behind after his sixth podium this year.

“Unfortunately, my bike did not start when it went into the lap on the grid,” reports the Italian. “I was a bit nervous then, but my team solved the problem. Then there were also problems on the grid. The transponder was going crazy.”

“During the race I couldn’t see anything on the dashboard. Still, it was a nice race. It was a great duel with Remy. But three laps to go I made a mistake because I had problems with the front tire. Still, it was a good one Weekend with the Pole yesterday and second place today. “

Navarro took third place on the podium for the first time since autumn 2019. Lowes had to be content with fourth place in front of his home crowd. Di Giannantonio crossed the finish line in fifth.

The other positions in the top 10 went to Augusto Fernandez, Aron Canet, Xavi Vierge, Ai Ogura and Joe Roberts. The Swiss Tom Lüthi finished eleventh and the German Marcel Schrötter crossed the finish line in 13th, behind Celestino Vietti, despite a long lap penalty. The last championship points went to Nicolo Bulega and Bo Bendsneyder.

The next Grand Prix will take place on September 12th in MotorLand Aragon (Spain).