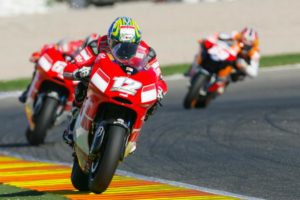 Australian fever has gripped Ducati again. After fielding an official 100% Italian team in 2019 and 2020 (Danilo Petrucci alongside Andrea Dovizioso), the Borgo Panigale firm has offered one of the two red coats from 2021 to Jack Miller. Being associated with Francesco Bagnaia, whom he has dominated for the past two years at Pramac Racing, he will be the backbone of the Ducati Lenovo Team.

An Australian showcased by Ducati, this is not a first. It would even be rather a habit, which Jack Miller himself noted during the presentation of the team: there have been few Australian riders in MotoGP in recent years, but almost all have ridden in a Ducati, teams officials and satellites combined.

The first to do so was inevitable Troy bayliss, integrated into the Ducati Marlboro Team upon the Italian manufacturer’s arrival in MotoGP in 2003. Outgoing vice-world Superbike champion, after securing the title in 2001, it took only three races to clinch a podium in the category. Two more followed, and his good results allowed him to finish 6th in the championship.

But 2004 did not go so well, riding a Desmosedici GP4 that was difficult to master and with which he made a number of mistakes. Only 14th in the general classification, the Taree driver was fired. His return to Ducati came in 2006, in the World Superbike Championship, where he won the title.

This success in WSBK allowed him to benefit from a one-shot in MotoGP: the 2006 Valencia Grand Prix, in the official Ducati of Sete Gibernau then injured. And Troy Bayliss did the unthinkable by winning the race, after leading every lap. The best answer possible to those who had dropped him from the category a few months earlier.

The following year saw the arrival in the official Ducati team of Casey stoner. Casey Stoner, who to everyone’s surprise won the 2007 MotoGP World Championship title, the only one in the history of the Italian firm. He remained with the Reds until 2010, before leaving them for Honda. Then to return as a test pilot from 2016 to 2018.

The third Australian to make his appearance in a Ducati – but not that of the official team – was Damian cudlin in 2011. The Blacktown rider, the 2010 German Supersport champion and then competing in the Endurance World Championship, was called up to replace the injured Loris Capirossi at the Japanese Grand Prix. Qualifying 17th out of 19th, he did not make it through the finish due to a fall.

Enlisted two weeks later to replace Hector Barbera (Mapfre Aspar Team MotoGP) at the Australian Grand Prix, he was forced to withdraw from the aftermath of a crash during practice on Friday.

Then came the turn of Mike Jones, three times. His first experience came in 2016, when he was chosen by Avintia Racing to replace Hector Barbera, temporarily transferred to the Ducati Team following the injury of Andrea Iannone. The 22-year-old finished 18th in the Japanese Grand Prix and then 15th in the Australian Grand Prix, ahead of his fans.

Australia, where he raced again in 2018, this time in the Angel Nieto Team’s Desmosedici. Behind that was another replacement story: Jorge Lorenzo being injured, Alvaro Bautista had been promoted in his place and someone needed to take the seat of the Spaniard. His race ended in 18th place.

Fifth and last of these men, therefore, Jack miller. Transferred to Pramac Racing in 2018, he spent three years there and each time improved his record: 13th in the championship in 2018, 8th in 2019, 7th in 2020 despite several bad luck. Retained by Ducati but promoted to the official team, he will make his first start as a factory driver on March 28 in Losail (Qatar).