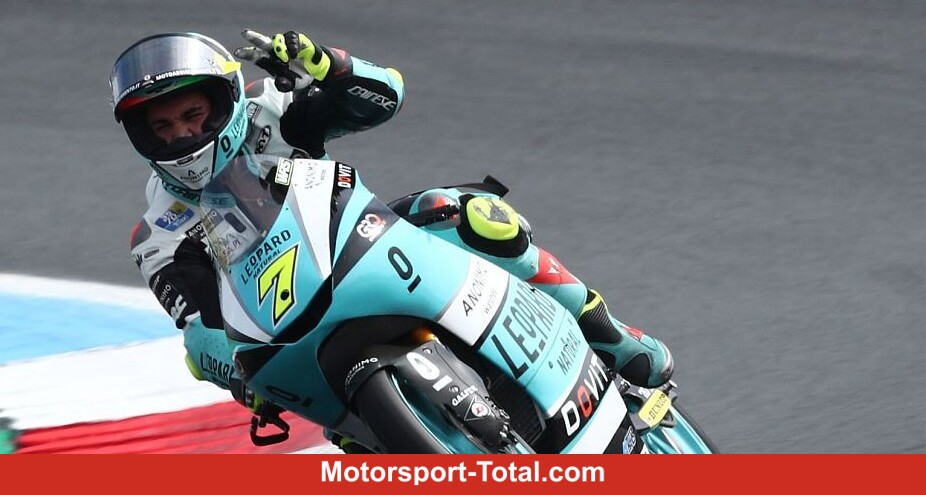 (Motorinformed.com) – Dennis Foggia (Honda) also topped the second Moto3 training session in Misano on Friday afternoon, but with 1: 42.333 minutes was slightly slower than his best time in the morning. He continues to lead the overall standings – ahead of World Championship leader Pedro Acosta (KTM) and Romano Fenati (Husqvarna).

Dennis Foggia also held the lead in the afternoon
zoom

After the rain shower in the morning, the second Moto3 practice session began on a completely dry track. Since the rain had washed some dirt onto the asphalt, the drivers initially slowly approached the limit.

Although the pace picked up towards the end, only about half of the field was able to increase its morning times. In addition, it started to rain again in the last few minutes, so that many drivers had to abandon their final attack.

Foggia’s FT1 best time of 1: 42.009 minutes remained unbeaten. He himself was a good three tenths slower than in the morning, but took the top spot in both sessions. World Cup leader Acosta moved up to 0.337 seconds of the day’s best time in the afternoon and thus took second place.

Fenati took third place thanks to his FT1 time. Behind them, Niccolo Antonelli (KTM) and Andrea Migno (Honda) rounded off the top 5. Wildcard starter Matteo Bertelle (KTM) came out on top as a strong sixth.

John McPhee (Honda), Deniz Öncü (KTM), Darryn Binder (Honda) and Filip Salac (KTM) took the remaining top 10 places. Binder caused the only incident of the session when he highsidered at halftime in the finish curve. He was checked through at the medical center but was unharmed.

Maximilian Kofler (KTM) increased his personal best by half a second. However, that did not change the overall ranking of the Austrian. He stayed in last place, 2.204 seconds behind the leaders.