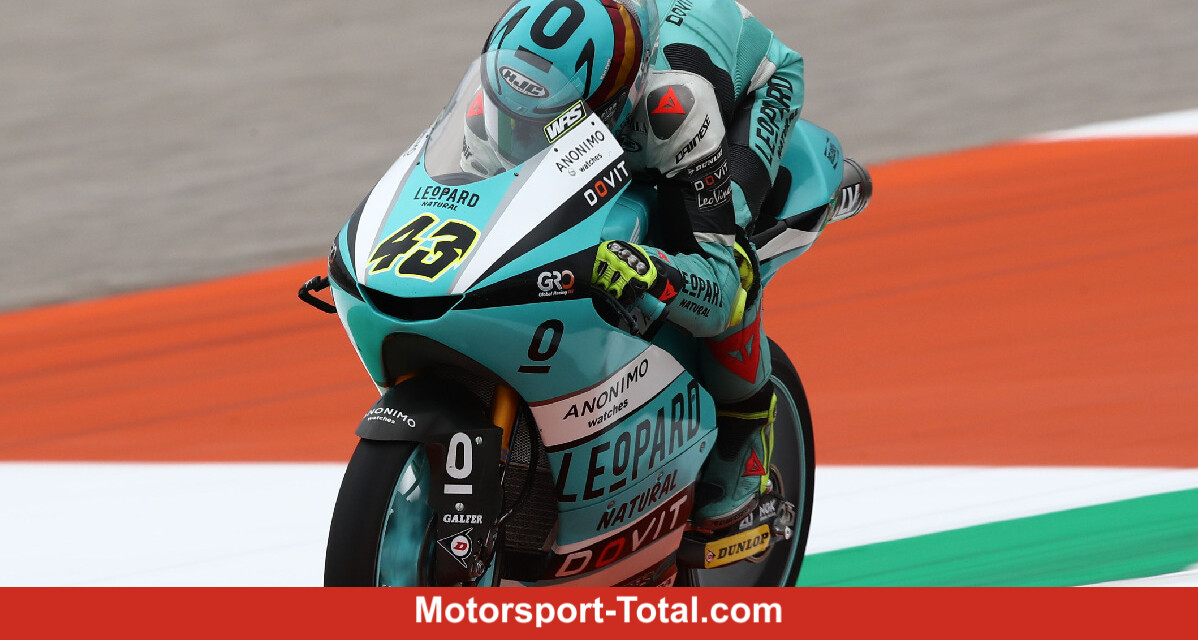 (Motorinformed.com) – Xavier Artigas (Honda) captured his first Grand Prix victory at the Moto3 season finale in Valencia in 2021. Sergio Garcia (GasGas) and Jaume Masia (KTM) completed the podium. So three Spaniards stood on the podium at the home race.

World champion Pedro Acosta (KTM) and runner-up world champion Dennis Foggia (Honda) also made the headlines. During the duel for the lead, there was a contact on the last lap at Turn 2, which caused Acosta to fall. Foggia received a time penalty of three seconds and was classified as 13th (race result).

At the start of the 23-lap race, Acosta immediately took the lead. But already on the first lap there was a dangerous accident at the exit of Turn 4. Lorenzo Fellon (Honda) had a highsider and the French tumbled into the gravel.

Behind him Darryn Binder (Honda) also had a highsider in the middle of the field. PrüstelGP rider Ryusei Yamanaka (KTM) fell while trying to evade. The rest of the drivers were able to evade. Fortunately, all three riders who had crashed were okay (look up all the action in the ticker!).

At the head of the field, Acosta and Izan Guevara (GasGas) fought a duel for the lead in the early stages. Nobody could leave. Masia, Deniz Öncü (KTM), Filip Salac (KTM), Artigas and Garcia also mixed in the top group.

Öncü and Salac had to drive a long lap penalty because they had disregarded the track limits too often. Tatsuki Suzuki (Honda) said goodbye to the leading group six laps before the end of the race by crashing into Turn 1.

Acosta falls in a duel with Foggia

At the beginning of the last lap, Acosta braked past Foggia in turn 1 and took the lead. Foggia countered inside turn 2. But it got tight and there was a contact. Acosta fell. Foggia was able to continue, but lost some positions as a result.

So the duel for the win was Garcia against Artigas. In turn 13, Artigas overtook his opponent and entered the home straight as the leader. Garcia could no longer pull out in the slipstream and had to admit defeat by 0.043 seconds.

“It’s a great feeling because things didn’t go so well for me recently,” said Artigas of his first win. “I always tried to do my best, but the team and bike weren’t always at 100 percent. It wasn’t an easy race today either, because in the end I had hardly any grip on the rear wheel.”

Garcia finished the season in third place in the World Cup (World Cup final result). “I didn’t have the best feeling for the bike this weekend. But the positive thing is: I’ve improved from season to season,” says the Aspar rider. “The race was hectic, there were a lot of overtaking maneuvers.”

Masia was third on the podium. “I’m happy to have ended the season like this,” says Masia, who was overshadowed by his Ajo team-mate Acosta. “It wasn’t an easy weekend. We had a lot of problems in every session.”

They were followed by Salac, Öncü and Foggia, who had initially dropped to sixth place due to the situation with Acosta. Foggia received a three-second time penalty for contact with Acosta. As a result, the vice world champion was downgraded to 13th place.

Stefano Nepa (KTM) was sixth, followed by Guevara, Carlos Tatay (KTM), Niccolo Antonelli (KTM) and Ayumu Sasaki (KTM). Because Romano Fenati (Husqvarna) had disregarded the track limits on the last lap, he was moved back one position and ranked 14th.

With this result, KTM secured the constructors’ championship for the first time since 2016. For the Austrian brand, it is the fifth title in the smallest class.

Ajo believes that Fernández spoke “underneath the affect of emotion”
Hyundai unveils last model of its 2022 automobile
V1.8 with BMW M4 GT3 and further developments
Toyota cancels Ogier’s first check in Rally1
Maximilian Kofler is moving to the Supersport World Cup in 2022