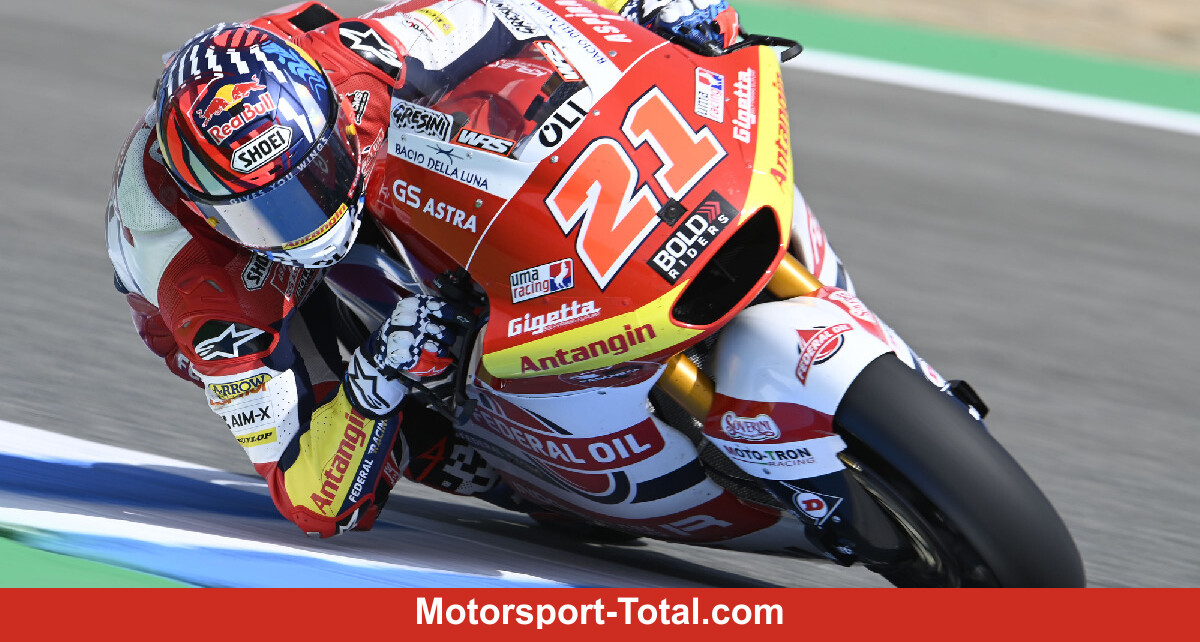 “Words fail me! It’s the reward for all the hard work,” said di Giannantonio, who drives for the Gresini team. “Today I had an incredibly strong rhythm. It was clear to me that it could work. I simply enjoyed the last few laps under my helmet. This victory means a lot.”

The World Cup remained exciting even after the fourth race of the season in 2021. With fourth place Remy Gardner (Kalex) defended the championship lead three points ahead of Lowes. Raul Fernandez (Kalex) is six points behind, Bezzecchi 13 and di Giannantonio 17 (overall championship standings).

At the start of the 23-lap race, di Giannantonio prevailed against Gardner in Turn 1. Bezzecchi, Augusto Fernandez (Kalex), Raul Fernandez, Xavi Vierge (Kalex) and Lowes followed. There were no falls in the start phase. Schrötter ranked twelfth.

The drivers threaded themselves like a pearl necklace. Di Giannantonio led in front of Gardner. Augusto and Raul Fernandez fought a duel for third place, with Raul Fernandez prevailing. Both are not related to each other.

On lap three, Augusto Fernandez crashed into turn 6. Moments later, Nicolo Bulega (Kalex) also slipped there. At the top, Raul Fernandez was on the rise. He quickly caught up with his Ajo teammate Gardner. Behind it, Lowes also increased the pace.

At the front, di Giannantonio was able to extend his lead over his pursuers to around one second in the first few laps. Behind them, Gardner, Raul Fernandez, Lowes and Bezzecchi huddled together. Di Giannantonio drove away from this group tenth by tenth (look up all the action in the ticker!).

Raul Fernandez grabbed second place from Gardner on lap eight and was able to drive a little faster than di Giannantonio. Gardner also came under pressure from Bezzecchi and lost third place to the Italian on lap eleven.

Tough duels for the other podium places

With ten laps to go, di Giannantonio was leading two and a half seconds ahead of Raul Fernandez, who was coming under increasing pressure from Bezzecchi. Behind them, Gardner and Lowes fought a duel for fourth place. Schrötter was in eleventh place at this point.

At the end of the 17th lap, Raul Fernandez made a small mistake in the target corner. Bezzecchi slipped inside and took second place. Four laps before the end of the race, Gardner made a mistake in Turn 1, which Lowes immediately took advantage of and grabbed fourth place.

At the front, di Giannantonio drove confidently towards victory. Bezzecchi was also second with a margin over the pursuers. “I am really happy”, “Bez” says happily. “The season opener was pretty difficult. This race was exactly what I needed. In the last five laps my tires were completely worn out, but this comeback was extremely important.”

Lowes cheers: important result after the crash in Portugal

Raul Fernandez let go and there was only one duel between Lowes and Gardner for the final podium. But Lowes didn’t let anything go and drove home third place with ease. The ajo duo was not on the podium this time.

“I didn’t have a good feeling in the first half of the race,” reports Lowes. “I fell back to fifth and took it a little easier. I didn’t want to fall again like I did in Portugal. If a podium is on such a difficult day, it’s not a bad day. This move was after what was in Portugal happened very important. “

Veteran Tom Lüthi (Kalex) finished 19th and didn’t collect any points. After the first four races of the season, the Swiss only has one World Championship point in his account.

MotoAmerica champion Cameron Beaubier (Kalex) fell while chasing Schrötter on the last lap in turn 9. Moto3 world champion Albert Arenas (Boscoscuro) was also eliminated due to a fall in turn 8.

Only 30 drivers started the race. Jake Dixon (Kalex) fell during the morning warm-up. The Brit suffered a concussion and was banned from starting by the doctors.

The next Grand Prix will take place on May 16 in Le Mans (France).