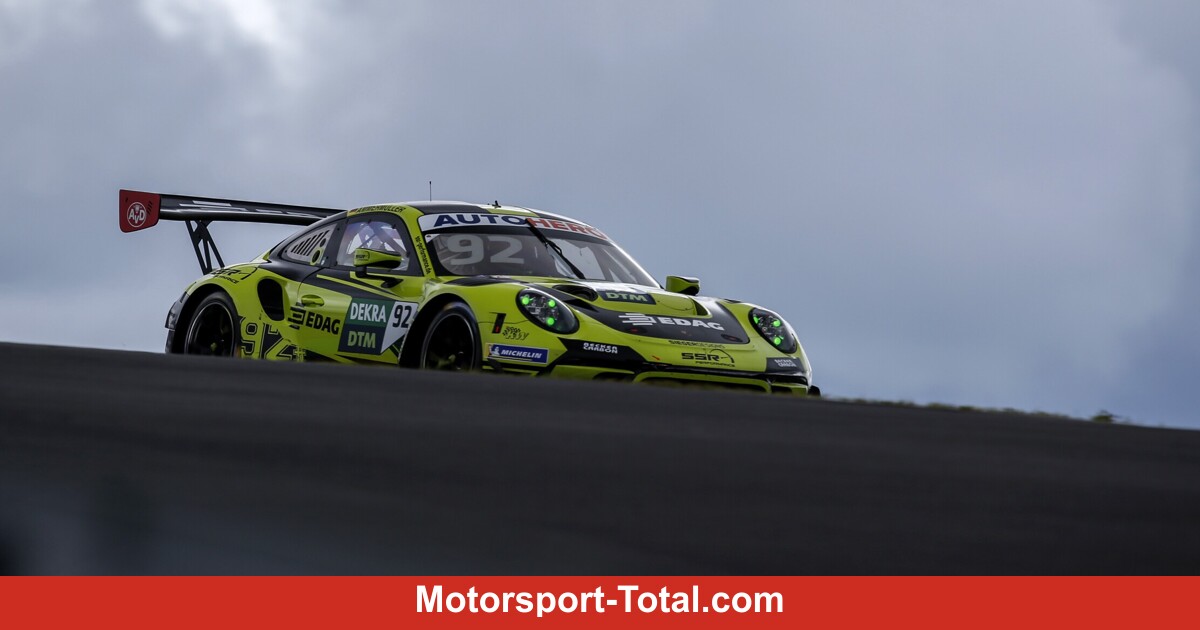 (Motorinformed.com) – “In my opinion, this has little to do with racing,” said SSR Performance team owner Stefan Schlund in a press release after the Porsche premiere at the DTM weekend at the Nürburgring. “Those responsible should act quickly so as not to ruin the reputation of the series,” he is quoted as saying.

Will the SSR-Porsche compete in the DTM in 2022? That is currently uncertain
zoom

But is the DTM for SSR Performance chapter over after the guest start before it has even started? ‘Motorinformed.com’ contacted Schlund directly to clarify this.

“In terms of quality, the DTM is still interesting for us,” explains Schlund im. Nevertheless, there are three points where he would like to see changes: the risk of accidents, the balance of performance and the tires.

“For the money I prefer to do a second guest start”

Above all, Schlund doesn’t like the fact that Michael Ammermüller’s 911 GT3 R, which was borrowed from another team for the guest start, was properly demolished after the crash festival on Sunday, but also after the race on Saturday. “Our car hit all around on Sunday,” he says. “The carbon parts and the splinter were broken both times – on Saturday and on Sunday.”

Schlund identifies the Indianapolis restart in close rows of two as the cause of the enormous damage to the cars, which this year will also be used as a race start because the GT3 cars do not have a performance clutch. “The fact that you are doing these re-starts is my biggest point of criticism, because there is the greatest risk of accidents,” says Schlund. “Especially if that happens two or three times in a race.”

Schlund understands that the DTM umbrella organization ITR, which has even developed its own term for its start procedure this year with “DTM Formation Start”, wants to provide action. “But this is not a works competition,” he sees a clear difference to the Class 1 DTM. “We have to finance this privately.”

So SSR would change the startup procedure

As long as you stick to this procedure, there will be collisions, says Schlund. “You have to stay on the back of the bumper. If the leader accelerates, I have to stay in the corridor and only get out of the way at the finish line. All of this ensures that I get to the first corner with a compressed field of 23 cars. That will always cause a commotion. “

His suggestion? “You can easily get around that by saying: As soon as the safety car turns in, the pole-setter can set the speed,” he says. “And when you get to the start-finish, the lights turn green. Then people can pull out. That changed in the GT Masters – and you can see that there are hardly any accidents at the start.”

The wild pace in the first laps in both races ensured that one of the main goals for the guest start could not be achieved: to generate enough data for the Balance of Performance (BoP). That had to do with the fact that Ammermüller only made it to the pit stop on lap six on Saturday and had to retire on Sunday on lap 16 after the collision with BMW driver Sheldon van der Linde with a puncture on the front right.

“On Saturday we could not produce any data to quantify exactly how the tire degrades on the long run and how big the deficit is – or the advantage of unloading the weight,” he points out that the AVL will drive the Porsche on Saturday after Ammermüller’s 20th place, almost a second behind, made it 40 kilograms lighter.

“And on Sunday Michi couldn’t drive a free lap. That would have been very important for the data production, so that AVL and ITR know what the BoP change has brought about. We didn’t receive any data in qualifying either because it was wet. “

Nevertheless, Schlund is of the opinion that the 911 GT3 R, which has a small boxer engine with an output between 530 and 540 hp, was not at the level of the competition in terms of output. “At the beginning we lacked ten km / h on the BMW at top speed,” he says.

“After the BoP adjustment, it wasn’t that much anymore, but Michi said that he had no chance at the first start and everyone moved away or passed by. You can ride well, but you can’t attack because the speed is lacking.” The fact that he made up a place at the start and was able to take third place was due to the fact that he was “able to brake very late on the outside” because of the lower weight.

Should SSR Performance enter the DTM next year, Schlund demands that the BoP fit right from the start. “I know that this is difficult in a new series, but nevertheless it must not be the case that the first races next year will be used to adjust the BoP. That has to happen in advance for tests and after the official tests.”

Because SSR Performance aims to drive for the title. “If I theoretically know before the season that I have no chance of winning this series, then I’m not going to compete.”

In general, however, he found the AVL’s approach to be very positive. “At our guest start we wanted to see how things are going in the DTM and how AVL acts with regard to the BoP if it is wrong. Will you meet us then? You have shown this will and moved in the right direction. That was very important – and that’s why you make a guest start. “

SSR requests return of the electric blankets in the DTM

But there is another aspect where Schlund is calling for changes: the tires. The SSR Performance owner demands that the electric blankets, which were banned in the DTM in 2017, be reintroduced. “A racing tire has to be heated because that’s what it’s made for,” he says. “We are in absolute professional sport.”

But wouldn’t that risk increasing costs? “The costs will not rise as a result, but fall,” he shakes his head. And provides an explanation: “Every lap that I drive around out there for free until I get into the working window of the tire costs me money. Especially when testing, because that’s where the main work happens with the tires.”

So if you need three laps per set of tires in a test before the tire is up to temperature, the costs are multiplied: “Sometimes we already needed ten sets for the test. Then I drove 30 laps for the cat”, says he is an example. To put it into perspective: a set of tires costs 2,000 euros. “When you consider that running a kilometer on a GT3 is very expensive, then I don’t need to talk about the cost of electric blankets anymore.”

Why electric blankets do not cost anything

Apart from that, he sees a safety risk in driving off with unheated tires. “And all DTM teams have electric blankets because they have already driven long-distance races where you heat up”, he cannot understand the argument that the electric blankets would cause costs.

He also wants the DTM to allow tire poker. “The series shouldn’t stay up to date, but keep improving,” he says. “You could also include an S7 tire in the contingent,” he says, referring to the softest of Michelin’s three GT3 compounds. “Or Michelin develops new tires over the winter with a soft, a medium and a hard compound so that there is a tire game. Then things get even more interesting.”

Schlund praises ITR: “You really made an effort”

How does it go on now? “We have to sit down with the ITR now,” explains Schlund, who, despite the criticism, is very pleased with the efforts of the DTM umbrella organization. “The ITR people really tried to make sure that nothing was missing in the run-up to the weekend,” he says.

“That is very positive. And now you have already contacted us, and we are looking for an appointment to discuss everything.” Above all, the media effect of the traditional series convinced Schlund. “The name DTM – that is, these three letters – is already impressive,” said Schlund. “You can see that very clearly. That’s why it was very positive for us in advance.”

For now, the team would like to concentrate on defending the title in the ADAC GT Masters and thus make history. Because no team has so far succeeded in winning two titles in a row in the DTM series. How should it go on then? “It is of course the wish and dream of every team owner to be at the start in both series,” replies Schlund. “Provided that the DTM can manage the BoP, because I don’t follow them.”