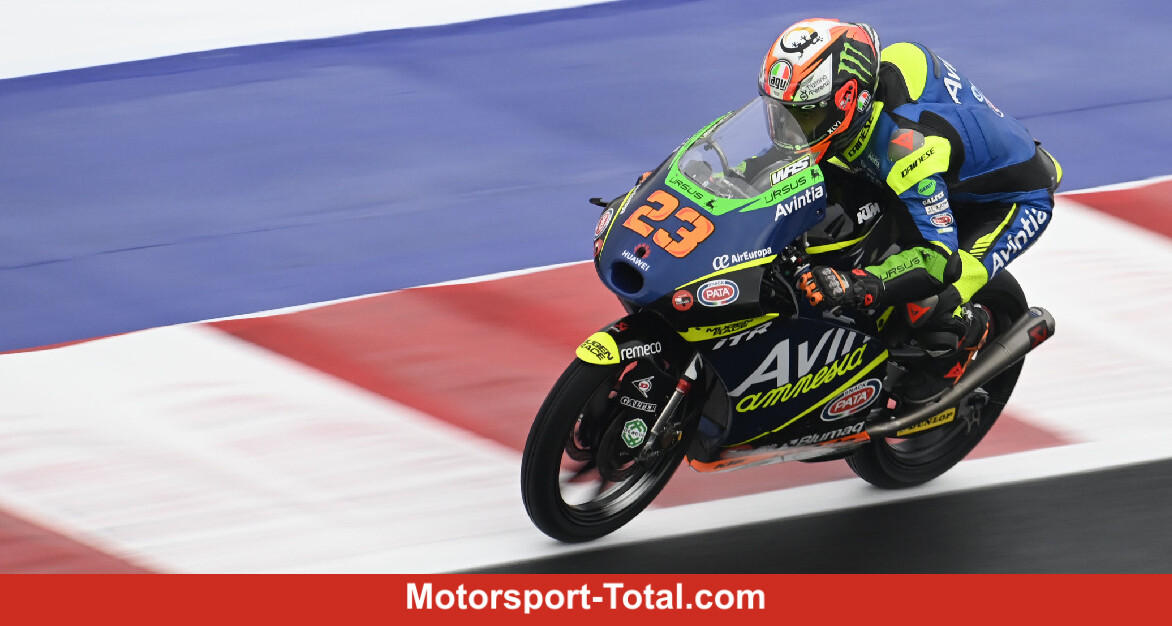 (Motorinformed.com) – Niccolo Anontelli celebrates his first pole position this season: The KTM driver first topped Q1 in the Moto3 qualifying in Misano and then drove to pole in a superior manner despite tricky conditions. With a best time of 1: 48.563 minutes, he clearly prevailed against his fellow brands Filip Salac and Riccardo Rossi.

Already in the first qualifying section an increasingly dry ideal line became apparent on the track. But the climate remained humid and hazy, so nobody risked slicks. Antonelli, Riccardo Rossi (KTM), John McPhee (Honda) and Jaume Masia (KTM) came out on top as the four fastest.

In Q2, too, the drivers opted for rain tires. Antonelli used the momentum from Q1 and took the lead with a clear lead. The Italian coped best in the mixed conditions. He got faster with every lap and finally increased the best time to under 1:49 minutes.

Antonelli in a class of his own in qualifying

He remained clearly ahead when Salac increased the pace again in the final phase and reduced the gap to 0.611 seconds. Rossi secured me third place on his last flying lap. With that, two drivers who had previously fought their way through Q1 made it to the front row.

The remaining top 10 places went to Masia, Alberto Surra (Honda), Stefano Nepa (KTM), Xavier Artigas (Honda) and Ayumu Sasaki (KTM). The latter caused the only crash in Q2, but was able to continue and secure tenth place. McPhee, who took a break from the flu on Friday, finished twelfth.

Romano Fenati (Husqvarna) experienced a qualifying to forget, who got stuck in fifth place in Q1 and will have to start the race from 19th place tomorrow. Andrea Migno (Honda), who was still fastest on Friday, also disappointed with starting position 22.

Tatsuki Suzuki (Honda), who had to pit early in the third free practice due to technical problems, crashed in Q1 and then did not get past 24th place. Jeremy Alcoba (Honda) couldn’t even finish his qualifying after a crash and ended up in 26th place.

Only the two CIP teammates Kaito Toba and Maiximilian Kofler (KTM) did worse. They were more than three or four seconds short of the best session time in Q1. You complete the starting grid from behind on race Sunday.